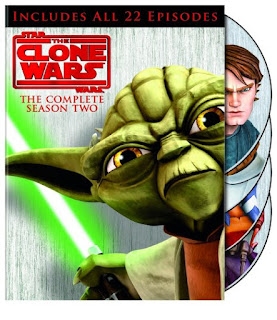 Season two of The Clone Wars does a great job of expanding the stories from season one. Although the series does bounce around a bit, since it's giving us glimpses of so many characters, we get a good sense of the progression of the war. All is not well with the Republic.

One of the things season two does is to give us a glimpse of the universe beyond the Republic and beyond the Separatists. There are a lot of bounty hunters in season two. And some pirates. Fun stuff. Oh, and one raging monster.

My favorite story of the season is the Mandalore arc. I think that trilogy of episodes is a must watch for any Star Wars fan. There's just too much important background for Obi-Wan. Definitely the first two, at least. You can find my reviews of those episodes here, here, and here.

This season also deals a lot with the philosophical issues around cloning. Or around the clones themselves. What makes an individual? What is just a copy?
Definitely check out this episode.

Season two really doesn't require that you've seen season one to watch it. Neither do most of the story arcs. With that in mind, I would suggest picking out an arc that sounds interesting and just sit down and watch it.
Posted by Andrew Leon at 12:00 AM