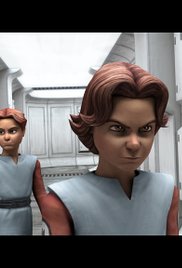 -- Who my father was matters less than my memory of him.

I have in my head this picture of the young Boba Fett first going off with Bossk and Aurra Sing, of him climbing the ramp into the ship with them, but I don't remember where that happened. The Clone Wars is not all in chronological order so, maybe, that's an episode later in the series. In this episode, though, the young Fett has already joined the bounty hunters, and he's undercover for them as, you guessed it, a clone trooper cadet.

It's unclear what the actual objective of the mission is, but Fett's objective is to assassinate Mace Windu. And it could be that that is the overall mission objective, but it seemed to me that that aspect of it was not actually what was important to Aurra Sing, she being the one in charge.

In effect, this is another episode about clone differentiation. Boba, going by the name Lucky, of course, blends right in with the other cadets. They look at him as a "brother." But Boba, while a clone, isn't actually like the other clones. He's the same but different, because Boba is actually a true clone of Jango, not a modified one like the other clones. Boba, though, still feels a kinship with the clones, the other cadets and the full troopers. He doesn't want to hurt any of them.

Aurra Sing doesn't care about any of them. Including Boba; he's just a tool to her.

The other thing of interest has to do with origin stories for established characters. It's not like Luke or, say, Spider-Man; we got to watch those origin stories as they happened. But you put in a character like Darth Vader or Wolverine, and everyone wants to know their origins. The problem is that the characters are so cool that no origin story can possibly live up to it, although it's entirely possibly that people would have been pissed if we'd first met Luke as full Jedi only to find out later that he started as a whiny farm boy from Tatooine.

Boba Fett suffers from this problem, probably even more than Darth Vader. When I was a kid, everyone wanted to know who Boba Fett was. It was great speculation. Finding out that he's just a clone of Jango Fett was a great letdown for a lot of people, although I think it works rather will considering the implied relationship between Vader and Boba in The Empire Strikes Back.

Effectively, this is an origin story episode. How did Boba Fett become the hardened bounty hunter that we know in Empire? This episode is how. Or, at least, the beginning of that how. There's a moment... but, well, that would be telling.


"When I show off, it is instructive. And inspiring."
Posted by Andrew Leon at 12:00 AM