-- Choose what is right, not what is easy.

A good question to ask about the Clone Wars is why the Republic doesn't use EMP devices against the droids. The truth is that they do, sometimes, use those kinds of things. There are some kind of EMP grenades that are used in some episodes, but I have to assume that, in general, the droids have some kind of shielding against EM pulses. Whatever they have, it wasn't enough to guard them against the giant electro-proton bomb the Republic used to wipe out an entire Separatist army in this episode.

You know, I'm not even going to try to describe the zillo beast other than to say that this is the Star Wars version of Godzilla, though the two creatures don't look anything alike. Also, the zillo beast has lightsaber-proof scales. Okay, fine. Here's a picture: 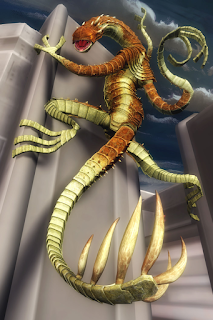 But the core of the story is the conflict between killing or saving the zillo beast. The dugs, whose planet the zillo occupies, want to destroy it. They don't care that it's possibly the last of its kind. Mace Windu wants to save it and relocate it. However, the Republic needs a treaty with the dugs to help in the war, and the dugs withhold their signatures from the deal until the Jedi help to destroy the beast. Palpatine, of course, plays politics with the situation, claiming that the treaty is more important than saving the beast.

It's a good episode, the first of two dealing with the zillo beast. I kept expecting that something would turn up later in the series in relation to this stuff, but I'm not remembering any return to creature at the moment. Maybe if the series had been allowed to keep going? It's hard to say, though, since there were still four seasons in which something could have come up again with the zillo.

Oh, this episode also gives us Mace saying, "I have a bad feeling about this." I think it's the only time we hear that from him. It's a good moment.
Posted by Andrew Leon at 12:00 AM