We went to IKEA.

I mentioned that before back when I was talking about getting the espresso machine and all of that, and I see from looking back that I said I was going to do a post about the whole IKEA trip thing. Well, I never did that. At this point, I'm probably not going to, either; this will have to serve as that post.

I think the IKEA thing is interesting because of the sort of cultural significance of what IKEA has become, i.e., a relationship testing grounds. My wife and I talked about that a surprising amount on our first trip (yes, that means there has been at least one other trip). She was worried that we would get into some kind of fight or argument in relation to the item we were going to purchase (yes, the "red thing"). 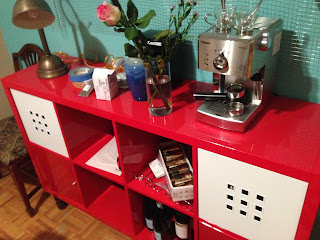 At any rate, the whole trip felt like some weird kind of rite of passage for us, like, even though we've been together nearly 20 years, we weren't a "real" couple because we hadn't been through the IKEA fire of purification.

Personally, I don't really get it. I don't get the whole fighting at and over IKEA. I understand why it happens, but I don't get it. See, the problem is that couples go to IKEA with no real plan about what they're doing or what they're getting, so they end up getting into arguments about that there in the store. And everything related to it. But my wife never does anything without a plan, so we've always already looked at all the options and come to decision about it before we ever buy anything so, when it comes to the purchase, we just go and buy the thing.

Which is not to say that we just have the argument at home, because that's not it, either. We're actually pretty good at just discussing things and knowing what's actually important to each of us. What's important is, well, an important thing, and it's important to know those things going in. For instance, we could have had a fight over the color, but that's not really important to me, but I think that's the kind of thing a lot of people would get into a disagreement over. Not because both parties felt passionately about the color but because there was a mild preference for something different for each person that ends up becoming a fight.

Learning how to discuss things and come to agreements is something that many people never learn how to do, and we had our years of learning those things, but those were a long time ago.
Mostly.
heh
But we made it through IKEA, and that's what's important, right?

When I was a kid, my whole family, including my dad, hated going to my paternal grandparents' for Christmas. It was horrible. Everyone sat quietly in the living room with the poor lighting and watched TV that was barely audible. That would last for hours before there were presents, which we were never allowed to open or play with while we were there. There were also no toys at their house, which is why the kids just sat and watched TV with everyone else. Nothing to do in the house, and we weren't allowed outside, because we always went over there one evening during the week leading up to Christmas. Oh, and there was no food, either. My grandparents would always get one of those store bought deli plates; you know, the one with the meat and cheese on toothpicks. One. It never lasted more then 10 minutes into everyone arriving, and we (the kids) were always told not to get more than one meat and one cheese until everyone had had some. That meant there was never any left because the adults didn't follow that rule.

We all hated it, and, yet, we went every year.

That was my fault. I don't remember how old I was, but I think it was sometime during middle school when I stated, "I don't want to go." Of course, I didn't want to go anywhere when I was in middle school. But I didn't go. I guess that kind of broke the whole thing. Not right away of course, because my parents and brother still went but only for a couple or few more years. The fact that I started refusing to go over there and sit on the couch for four hours (or more) staring at the wall eventually allowed everyone else to stop going, too. Or something.

And sure, you could say I was (or am) just a bad person for refusing to go to my grandparents' house for Christmas, but really? Family obligation only goes so far and should be two ways.

But that's not what this is about. It's just an example.

When my wife and I prepared to spend our first Christmas together, we actually sat down and had a long talk about how to do it. I really had left all of my traditions back in the South, so it was all about looking at what was important from each of our childhoods and working out what we wanted to do. And that was great. But...

The food was not great. We've been doing the very basic ham, mashed potatoes, etc thing for nearly two decades, and the ham ends up sitting in the fridge for days after being eaten pretty much only by me. Not because I like it that much but because I don't want it to get tossed. But, you know, tradition. And my daughter especially gets ruffled whenever any tradition thing gets changed (just this week she was bemoaning the loss of a sandwich shop (the shop shut down at least five years ago) where we used to get sandwiches every year for Independence Day firework show).

However, in part because of all of the other changes during 2015, just after Thanksgiving, my wife said to me, "What would you think about doing something different for our Christmas dinner this year?" I, of course, was all for it. And, surprisingly, my daughter (and the boys) bought in, too. So for Christmas, we had a big "traditional"-ish Italian Christmas dinner. It was really great, and we decided to do some different ethnic theme every year from now on.

In fact, we have actually worked that into our food routine. January was our month for exploring Indian food, and we learned how to make several different dishes (and my wife made the most amazing naan!). March will be Moroccan cuisine. February, due to travelling, has been a carryover of Indian. It's a lot of fun exploring foods this way, and it never would have happened if we hadn't messed around with our Christmas tradition.

And there was no leftover ham this year!

Well, not until New Year's when we did Cuban food and needed ham for part of that, but oh well...
Posted by Andrew Leon at 12:00 AM