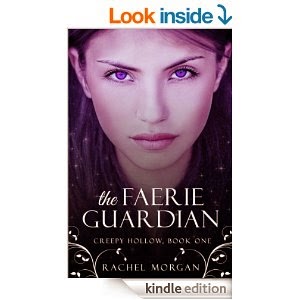 Before I get into the review for this book, I'm going to call your attention back to a post I did dealing with objectivity and subjectivity in responding to books. I'm having a very divergent reaction to this one, so I want to make sure I am qualifying it ahead of time. Remember these:

"The Faerie Guardian" started off on the wrong foot with me. It's not really the fault of the book or the author. I mean, I'm the one with the thing against first person/present tense presentation. But it is first/present, and I couldn't stop myself from groaning inwardly when I started reading it. And this example is pretty typical of the stuff I've read using first/present, so it did nothing to distinguish itself for me. But, you know, I get that that style is popular, right now, so I can hardly fault the author for choosing the style. I'm just not into it.

So the main character is a "fairie" girl, and I say "fairie" because she's just like a human teenager down to the pop culture references that, as far as I can tell, she shouldn't have knowledge of. In fact, she seems more conversant in pop culture than she does in the culture of her own people. In fact, in her narration she refers to other fairies as "fairies," as in "the fairie stood there," which would be like me saying, "the human stood there," which is not a thing I would ever say nor have I ever heard any human say. Awkward. All of that to say that I had a hard time buying the protagonist as anything more than a human teenager with some convenient magic. And that doesn't even touch that the purple-haired fairie is named Violet.

The other main issue I had with the story also started right up front along with the first/present stuff. Violet is in a boy's room to guard him from a snake fairie thing, and, of course, she sees him sleeping. And, of course, she is smitten by him just from watching him sleeping. Maybe this is just a disconnect because I'm a guy, but the whole romance angle seemed more contrived than realistic to me. There was just no reason for it and it felt out-of-character to for Violet to react that way. I mean, there's no indication that she has a habit of instantly falling in love with sleeping boys, so I need something more from the story than that she arbitrarily had feelings for this one boy because she saw him asleep.

From a technical standpoint, the book was fine, and I can see why people like it (and based on the other reviews, I see that most people do like it); it just didn't appeal to me. The writing is fine. It's well edited. But it's not my story. This is one of those where I can see that it's (probably) good, but I don't like it. For this one, I'm being that guy at the party that goes over and gets a helping of whatever it is everyone is raving over, I put it in my mouth, make the yucky face, and spit it out. Everyone looks at me like I'm crazy. Eventually, like, one other person comes over and pats my arm and whispers, "I didn't like it either."
Posted by Andrew Leon at 12:00 AM