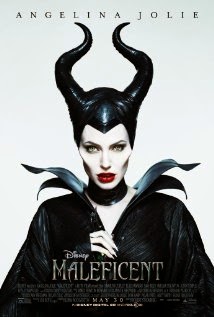 Let's get one thing straight right here at the outset: This is not any kind of prequel. This is not the live action prequel to Disney's Sleeping Beauty. It doesn't pretend to be. This is not like Oz the Great and Powerful (which is a prequel but which I still haven't seen).

No, Maleficent is the story of Sleeping Beauty told from the perspective of the villain. Sort of. At any rate, it's told from a different perspective than the one that has been presented in popular culture for the last half century and more. I think they did an amazing job.

The movie is magnificent to look at. The tree men that serve as the border guards are astounding and the land serpent was... well, that was incredible. Not to mention the work they did on Flittle, Knotgrass, and Thistletwit. And the dragon! Well, I think it's enough to say that the movie looked amazing, but, then, there is also Angeline Jolie who was impeccable in her role. Not that there wasn't makeup to go with that, but I think she almost didn't need any help pulling off the fairy look. Except for the wings. I think it's safe to bet that she doesn't have her own wings.

The performances were excellent, especially Jolie. Elle Fanning pulled off exactly the persona of someone who is happy and beautiful all the time. Sharlto Copley was crazy scary... or, maybe, he was scary crazy. One of the two. The three fairies pulled off the same sort of bickering as the fairies in the animated Sleeping Beauty; they were wonderful and hilarious. And Sam Riley was great, too.

The only possible issue with the movie is the whole "true love" thing. Disney continues to try to undo its whole cliche around that theme, which is fine and good, but it hasn't even been a year since Frozen, so I hope this is not a new trend, taking the "true love" theme in some other direction every movie for the next... well, who could even guess how long that could go on. Anyway, it was fine for this movie and handled well, but 3/4 of my family reacted in the same way to it: "I hope this isn't going to be their new thing." I guess we'll just have to wait and see on that one.

Overall, this is a great movie. It has everything you could want, none of which I'll name, because that would mean spoilers, even if I did already mention the dragon. But, then, we all knew about the dragon, right? Wait, it doesn't have lightsabers, but I think that's okay. I'll just put it like this: My wife cried. It's almost a certain thing that a movie is good if my wife cries, so there you are. This one gets 5 tears.
Posted by Andrew Leon at 12:00 AM