Unexpected Applause: Up So Down (a book review post) 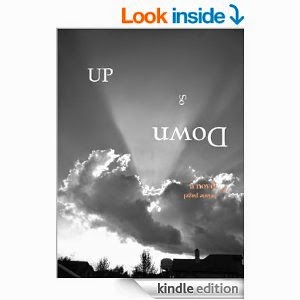 Let me just say right at the start of this that I really enjoyed this book. It's not spectacular in the sense of The Avengers or something like that, but it's very solid and quiet. In fact, it is much like getting to know people, a little at a time. I want to get that out of the way because some of the things I am about to say might lead someone to believe that I didn't like that book or that it's not very good, but that's not the truth at all. In fact, the book is very engrossing in the sense that you really want to know what's going on in these people's lives, but, if you want a book to pick you up and carry you along, this book is not for you. This book is calling up your friend and saying, "Hey, Bumpy, would you like to get some coffee and hang out a while?" You have to take the initiative, but it's well worth doing so.

Because it's me, let's just get this out of the way:
The book needs some editing and formatting help. Mostly, it's nothing all that serious, an overuse of commas that most people won't notice, but there are some spots where there are wrong words or names and a couple of those spots did make me have to go back to figure out who was talking at a given a moment. There is also some inconsistency in the formatting, but it's hard to say whether that's a real issue or not. For me, there is a minor visual distraction, but I don't know if it's the kind of thing most people pay attention to or not. In a book that's not as well written, the editing and formatting issues would be bigger problems, because they would highlight the problems in the book as a whole, but, here, they are more like swatting at an annoying fly rather than being caught in a swarm of yellow jackets.

Now, the major element in the book that is likely to cause problems for people is something that is there on purpose and which I enjoyed very much: the story is told non-linearly. In general, we don't like non-linear stories all that much, but I think this one worked well. As I was reading it, I kept thinking, "This is like how it is to get to know someone." When you meet someone, you don't get their chronological life story laid out in front of you. What you get are small stories that are shared at relevant times and those things rarely happen in sequence. That is how we learn about Sarah and Bumpy, little pieces of a year or so of their lives connected sort of by theme rather than by when they happened.

So, as I said, I kept thinking about this idea of getting to know people as I was reading the book, then, when I got to the end, in the author's note, Briane Pagel talks about choosing to write it that way because that's how you get to know someone, so, with that intent in mind, I have to say he pulled it off perfectly.

That non-linear aspect to the story is what propelled the reading of it. You find out early on (so this isn't much of a spoiler) that Sarah's fiance has died. She thinks it was murder. So, of course, you want to find out what's going on there. To some extent, Sarah blames her brother, Bumpy, for what happened, but that's complicated by Sarah's guilt over a childhood event between her and her brother for which she blames herself and which causes her to blame herself for, basically, Bumpy's life and how messed up it is. How messed up it is according to her, at any rate. So, then, because she blames Bumpy's irresponsibility on herself, she also, somewhere in there, blames her fiance's death on herself, too. She's a little messed up, to say that least.

The other issue that is potentially an issue for people is the lack of resolution to most areas of the lives of the characters. I will admit that when I got to the end I had a very "What? It's over!" reaction. I was a bit upset. But the farther away I get from finishing the book, the more okay I become with the way it ends. This is not an action/adventure thing where the space ships take off from the previously hidden rebel base to fight the enemy space station and it just ends leaving you hanging. This book is like being in people's lives, and people come in and out of our lives, and it's more the kind of thing where you to turn to someone several months down the line and says, "Hey, you remember Sarah? I wonder what ever happened with that thing with her fiance? Did they decide it was a murder or not?" And the other person says, "You know, I haven't seen her in months. I wonder what did happen with that. Have you heard what happened with her brother?" That's exactly how this book feels to me, like my life crossed paths with these people for just a little while, I got to know them a bit but not all the way, and they passed back out of my life. So it's not that there aren't resolutions; it's just that I don't see those people anymore so I don't know what happened with them. Sometimes, I'll wonder but, mostly, I will just go on with my life.

There's your measure of deciding if this book is for you. It's certainly not your typical fare, and I think that's a good thing. If you need a bunch of action, look somewhere else. If you want to get involved and invested in some characters, pick up Up So Down.
Posted by Andrew Leon at 12:00 AM