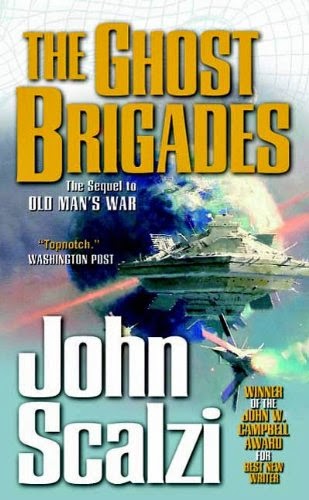 The Ghost Brigades is the sequel to Scalzi's book Old Man's War, which didn't get the highest recommendation from me. You can check that review here.

Actually, there was a pretty significant hiccup at the beginning of the book, and I was willing to overlook it when it was the only wrinkle but it becomes more noticeable when combined with how the book ends. I mean, when the opening is weak and the ending is weak, well... it makes it difficult to look kindly on the book.

The book opens from the point of view of an alien [and this is a bit of a spoiler, but it's only the first 15 pages or so, so it's not much of one], only we're not supposed to know that. The way we don't know that is that we're experiencing everything through the character's internal perspective without any external descriptions. That way, see, we're "surprised" to find out that this character was really an alien with animosity toward humanity. The problem I have with this is not the trick of it (okay, actually, I get annoyed with these kinds of tricks by authors where we're only fooled (if we are) because the author purposefully left out information which, honestly, we ought to know) but that the alien acts entirely human. His emotions and thoughts and everything are equivalent to what humans would have so, really, he's not an alien when he ought to be completely strange. Just on Earth, humans can have such cultural differences, while still being human, that we are, at least, disconcerted to be around the other person. That a species of an entirely different planet would think and act like a human so much so that we are "fooled" by it is mildly ridiculous at best.

But I got past that issue, completely forgot about it, once I moved into the story proper. That character at the beginning of the book is mostly inconsequintial and easily dismissed once we've gotten caught up in the mystery of Charles Boutin and Jared Dirac. And that was a good, engrossing story right up until somewhere around 75-80% of the way through the book.

Then the bottom falls out of it.

At least it did for me. And there will be a major plot point spoiler here, so feel free to skip past.

There's this bit of tech in the book (both of them) called the BrainPal. It's pretty much what it sounds like, a computer in the brain to assist the soldier and allow things such as internal communication with other soldiers with a BrainPal. Scalzi felt the need to disable the BrainPal en masse, so he went back to an 80s trick and had Boutin do it with a secret backdoor in the code. Now, I get that this a thing that we've been seeingin movies and books for about three decades, but, at this point, the idea of a secret backdoor in a program is ridiculous. Everything about it is ridiculous.

So, in the book, the reason the backdoor is there is to allow Boutin easier access to the program he's working on, but I think we all know that to access, well, anything all you need to do is input your password (or whatever the equivalent is). To get in through a backdoor, you have to input your password (or whatever the equivalent is). It doesn't allow any kind of ease of access or speed up the process, so, from that standpoint, it's pointless.

Beyond that, Boutin is not the sole architect of the computer program he's working on. In fact, he's not even the primary architect. He's just part of the design for one small part of the BrainPal, the consciousness transfer aspect of it. Asking us to believe that Boutin was able to put in an exploitable backdoor when working within a group and not even the lead in the group is asking us to believe something that is totally implausible, and it's easier to accept things that are plausibly impossible than implausibly possible. Basically, Scalzi is asking us to believe that everyone Boutin was working with was incompetent, in which case, the BrainPal wouldn't work, anyway. [This is on par with expecting us to believe that John Perry is the only one to understand the truth about the Consu in Old Man's War. It's just not plausible.] Scalzi does, at the end of the book, acknowledge (through the characters) that a backdoor like that shouldn't have existed, but it doesn't make it less of a contrived scenario to create tension at the end of the book. Basically, he had created a "Superman scenario" and used the backdoor as his Kryptonite.

So the book fell off of a cliff for me and plummeted to the rocks below. There's nothing that will ruin a book more than bad ending.

Sure, it might just be me, but anyone who knows anything about computers and how people work together and will probably find the contrived backdoor fairly laughable.

And I'm not even going to talk about how ridiculous the motivations of Boutin were. I thought as I was reading through the book and the obvious motivations were given that it must be a trick because it was so cliche. I figured Scalzi had something more interesting, more clever, up his sleeve but, no, it was all straightforward cliche and based on things that went against how given characters and races should have acted. It even had the super villain monologue at the end. To say that I was disappointed doesn't come close to how I felt at the end of the book.