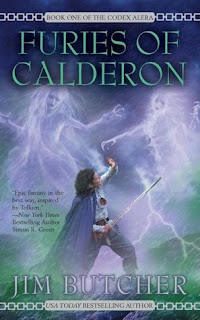 Any of you who have been around here for a while will know that I have a fairly high tolerance for reading -- let's say -- poor books. Sometimes really poor books. Sometimes really poor series of books. It's not that I enjoy it -- the pain of reading bad books -- I just don't like not finishing something that I start. Also, I tend to hold out the hope for some of them that they'll get better.

I suppose I was hoping this would be one of those, one that gets better, because I like Jim Butcher. The Dresden Files are great, at least the first dozen or so that I've read are, so I was expecting that The Codex Alera would be at least somewhere in the same range of quality.

This book was bad.

Seriously, there was nothing in it that I enjoyed. Not even a single character. The plot was a pretty cliche. And don't get me started on the magic system.

Let me give some context:

I picked up the first two books when I got Furies. See, I really did expect to like it. Jim Butcher, right? By halfway through, I'd decided that there was no way I was going to read anymore of the books, and I hate not reading a book that I've already bought. It's a waste of money. But it was so bad I knew there was no way I could do it.

But I decided that I would, at least, go ahead and finish the one I was reading. I mean, Jim Butcher! It could get better! There was a chance, right? So I forged ahead... and got to within a hundred pages of the end of the book (and it's a long book, so 100 pages was, really, close to the end) and...
Well, I decided I'd had enough. Even with just only 100 pages to go, I couldn't bring myself to finish it. It wasn't worth wasting that much more time to do.

Here's my insight into this series:
Butcher has said that he always wanted to write epic fantasy. It was what he started out trying to do when he was a kid after reading Tolkien. I think this is the story he came up with when he was a teenager, maybe a middle schooler. Once he got famous enough off Dresden, he went back to this story he dreamed up when he was a kid and began writing it without any changes. Because it reads like it was written by a kid, and I've read enough stories by middle schoolers to recognize the style.

Oh, and possibly the worst thing in the book?
He uses the word "pace" all the time! No one walks; everyone paces. And it just doesn't mean the same thing. It broke me from the story every time he used it, sometimes three or four times on a page. It was awful. That wasn't the only word he used repetitively, but it was by far the worst.