Girls of the Golden West (an opera review post) 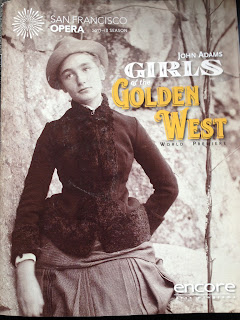 Here we are at the end of another opera season...
It's short this year because of next summer's presentation of The Ring Cycle. WooHoo! I can't wait.
...and I was really hoping it would end with a bang. Maybe something like a gunshot, considering this last opera being performed, but, if it was a gunshot, it was a popgun.

It's too bad, too, because I really wanted this to be great. For one thing, it's cool to get to go so world premiere operas; this makes our third. For another thing, after our gold country tour back in May, we felt a connection to the subject matter. However, one thing I've learned in my opera going is that I don't enjoy operas done in the modern style. It's the music: I just don't enjoy it.

So, yes, as with Elektra earlier this season, I couldn't get into Girls of the Golden West because the music proved too much of a barrier.

Not that it didn't have a few moments...

That's how the music was for me in Girls. Someone would begin a beautiful aria, the music would start to take off, then it would be over and back to the driving rhythms.

It was disappointing, to say the least.

Having said all of that, the performances were great, and the opera has an interesting story. A compelling story about three women during the California gold rush. True stories, even. However, the writing was not quite compelling as the librettist frequently fell back on narration to tell you what happened rather than showing it. For instance:

There's a hanging. The lead up to the hanging happens onstage but, then, as the hanging is about to happen, one of the characters turns and, basically, tells the audience that the hanging happened and that's the end of it. There are several moments like that in the opera.

So... I'm glad I saw it. It was far from horrible, but I don't feel like I would want to watch it again. I am interested in seeing some of Adam's earlier operas, though, especially Nixon in China, which is quite famous.
Posted by Andrew Leon at 12:00 AM