Clearly, It's MY Fault

As I mentioned many weeks ago, I've decided it's time to clean out my garage and sell off my old comics, most of them, and a lot of my old gaming stuff. Well, I probably didn't mention the gaming stuff, but I've been coming across things I don't want to store anymore, so a lot of that is going to go, too. Naturally, I turned to eBay as my platform for moving stuff out of my garage.

Okay, so maybe it's not "naturally" to other people, but it is to me. I haven't used eBay in a lot of years, but I was one of the early adopters... wow! That was back in the 90s! Yeah, I was using eBay all the way back in the 90s! So, yeah, it was natural for me to pick eBay back up and use it to start clearing things out.

One of the reasons I quit using eBay was the people. Using eBay as a seller is like working in customer service at Toys R Us, which I have done and is why I know that it's an apt comparison. Not everyone has a complaint, but no one is happy to be in Toys R Us. None of the adults are, anyway, which means that if someone is at customer service, you're already at two strikes. All of which leads me to believe that no one is happy to be on eBay, either.

Then there's the problem that a lot of people on eBay, mostly white dudes, are hoping/expecting to get stuff for nothing; like, if you're selling on eBay you must not want whatever it is anyway, so you should just hand it over to said white dude for free, but I'll get to more on that in a minute.

Also, there was the whole thing with constantly packaging things and long trips to the post office, but that's another beast entirely.

But, for the sake of garage clearing and possibly making some bucks off of my stuff, I was willing to venture back into the wilds of eBay again. Let me just say that things are worse there than ever before.

So I ran up a comic book auction. It wasn't really complicated, but it was non-conventional. I have a LOT of comics, and I don't want to try to run separate listings for each and every one of them, and you can't make any money selling them in bulk. For the amount of trouble that is in comparison to the lack of significant return, I might as well throw them in the trash. What I decided to do was to list a few hundred comics for the auction winners to choose from. The auction was clearly stated as being for ONE comic book only with the winner getting to choose the issue s/he wanted. A few of the issues had a minimum bid before they could be chosen. It's really quite simple.

Let me preface what I'm about to say with this:
All of the six auction winners I've had so far were white dudes. Yes, I'm sure. All of them.

Of the six, five did NOT read the auction text. That means that only one of them contacted me with his requested issue along with his payment.

I had to send requests to each of the other five to find out which issue was wanted. All five requested issues which 1. were not listed in the auction or 2. was an issue that had a listed minimum bid requirement that was higher than their bid. So, even after it had been pointed out to the them that they needed to read the auction text, they FAILED to read the auction text adequately enough to make a valid choice.

After a second email about choosing a comic from the supplied list, only ONE guy came back with a valid choice. One guy, after much discussion, apologized profusely and asked if I would let him out of the auction (that's a longer story, but that's what it boils down to). Another guy sent me about six or seven requests for books that were more expensive than his bid or not included in the auction (naming the same issue numerous times) before he he landed on one that was available (my guess is that he was using a dart board for his decision making).

Which leaves two guys, 1/3 of the auction winners, which fits in with the greater demographics of asshole dudes in the United States. These two guys got so mad about their own failure to read the auction text and know what they were bidding on that they filed complaints against me to eBay. That is pretty much the definition of white dude entitlement.

One of these guys thought he had won the entire lot of 300+ comics for $2.50 with only a $4.00 shipping fee. Seriously, the shipping fee should have tipped him off. The cost of shipping that many comics all together is EXPENSIVE. Like in the triple digits expensive. Anyone with half a brain firing working at even half capacity would have realized something was up, but no... Not him. No, he accused me of changing the auction text AFTER he won the auction, something which isn't even possible to do. Once a bid has been entered, eBay doesn't allow auctions to be edited. But stupidity and entitlement never let facts get in the way.

The other one... Well, the other one literally thought he was going to get something for nothing. He wanted a comic on which I had placed a high minimum bid because the comic, for those of you who know what this means: a silver age book, is worth about $150. My minimum was less than half its value, though. So this guy had a bid of about $10 and demanded the silver age comic anyway. Here are the things he revealed to me during our email exchange:
1. He intended to re-sell the issue. On eBay. He felt like he could get at least $15 for it, which, as far as he was concerned, was all the issue was worth. [Just to be clear: This is not what he believed. This was his tactic to try to get me to believe that I was getting a good deal to just let him have the issue.]
2. He had a coupon from eBay which would reduce his effective payment to $0. He would literally be getting the issue for FREE, giving him 100% profit on the re-sell. [I know this because I asked him why he was willing to pay, after shipping, more for the issue than he believed he could sell it for, and he told me about the coupon which would allow him to get it for nothing. Something for nothing.]
3. He's a flipper, which is something I'll get into in another post.

You know, I can understand being disappointed in discovering that you had misunderstood something and that you're not getting what you thought you were getting, but I really don't understand the unwillingness to own up to your own mistake, especially when it's right there in front of you. I know that it happens and that a certain group of people do it all the time (roughly 30% of white males, for sure), but I really don't understand it. Both of these guys acted as if their lack of reading the auction text was MY fault, and both of them accused me of doing things to try to cheat them, cheat them out of what was rightfully theirs. They both felt they DESERVED, were ENTITLED, to have my stuff. For FREE.

Because they're white dudes, and that's what white a significant portion of white dudes believe. They believe they deserve to have their cushy life provided for them with no effort on their part. And, yet, they also believe that other people are freeloaders, people working much harder at making a life for themselves than they are. The alt-right is full of these guys.

And, no, I'm not saying these two guys are alt-right, because it's not JUST dudes on the alt-right who believe this kind of thing, but I couldn't get away from the percentages. It's too perfect an example of white male entitlement.

I don't know... If this is what I'm going to have to deal with on eBay, maybe I will toss the comics in the trash. 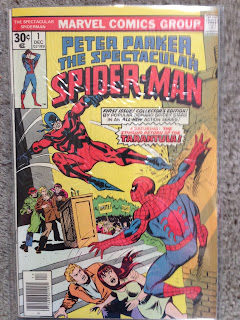