A Pocketful of Marbles 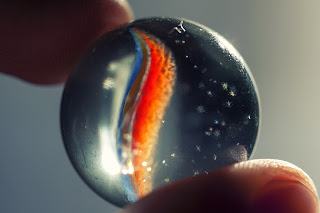 Remember marbles?
Not, do you know what is a marble, but do you remember marbles? Like from when you were a kid. Back when marbles were magical and sprang into existence through spontaneous generation and you only acquired new ones by finding them, trading for them, or having some benevolent Being gift some to you. When I was a kid, I did, in fact, have a special bag just for marbles. And acquiring new marbles was always cause for trading with my friends, some of whom also had marble bags though some just had jars.

Marbles were like trophies. When you're a kid, trophies also are like magical totems that come into existence for the sole purpose of being awarded to kids who have risen to the level of trophydom. After all, you can't buy trophies at the store, so they must be special. Unless, you know, there are special trophy stores... which there are... but you don't find that out until you're older. Like that whole Santa Claus thing.

But marbles! Marbles were better than gold. Of course, mostly, you could only trade them for other marbles... unless you had some super-cool marble, and, those, you could trade for almost anything. They were magic baubles. You could do a lot when you were a kid with a pocketful of marbles.
Not so much anymore, probably, but the philosophy is sound.

Because, in the end, marbles are worthless. Just bits of polished glass.

Right now, Republicans, the voters, are being dazzled by these bits of polished glass. GOP congressmen have filled their pockets with marbles and are trading them for your freedom. For our freedom, and you Republicans keep handing us over to them in exchange for shiny baubles that mean nothing.

They offer you a wall to keep out all of those dirty illegals,
and you give them your healthcare.

They offer you a tax break,
but they raise your taxes so that the rich can continue to get richer.

They offer you jobs
but give you a ruined environment.

They offer you guns
but give those to you as mass shootings, because the US is #1 in the world in mass shootings, the GOP is determined to keep us that way. After all, America has to be great at something, right?

They offer you marbles,
and you give them your freedom.

Unless your idea of freedom is the freedom to pay them more money. For everything.
Because that's what the GOP is all about, pricing the poor out of life and making slaves of them. And if you're not super rich, you're the poor. In the Republican world view, there is no middle class, and they're doing everything they can to siphon all of that money up to people who already have too much.

So if you're a Republican or if you vote Republican, especially if you voted for Trump (#fakepresident), I hope you have fun playing with your marbles. Maybe one day you'll open your eyes (or get your heads out of your asses) and see that you gave away everything of value for a few bits empty promises and polished gas.
Posted by Andrew Leon at 12:00 AM