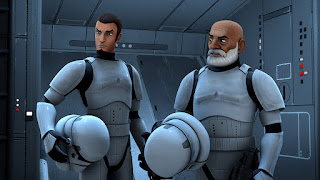 Well... It's actually been a couple of weeks since I watched this and it's not exactly fresh in my mind. The Last Jedi is fresh in my mind, but I'm not going to talk about that until I've seen it again.

Here's the thing, Kanan and Rex don't exactly like each other. More to the point, Kanan doesn't like Rex. You kind of can't blame him considering that Kanan was a Padawan when Order 66 was enacted, and he watched his Master killed by clones and had them try to kill him, too. There's a lack of trust going on despite the fact that Rex has stated he removed his control chip prior to Order 66.

Kanan and Rex do have a thing in common, though: their affection for Ezra. So, of course, when Ezra is captured, Kanan and Rex go together to rescue him. I mean, neither of them can let the other guy get the credit for it.

Yes, this is another rescue mission... but it's not exactly the kind of rescue mission you'd expect.
And it's a lot of fun to have Rex and Kanan together.

"This armor doesn't protect you from anything!"