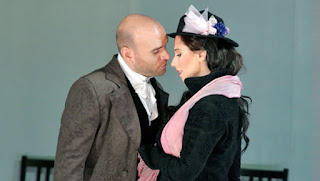 Before I get into the review, let's have some background.

One of the ways my wife and I are able to afford the opera is that we sit in the cheap seats. The San Francisco Opera House has multiple balconies, and we sit allll the way at the top. Well, close enough. We also buy season passes, because that's much cheaper than buying show by show. Because up at the top is so far up at the top, for certain performances, they have screens that lower for the upper balcony and they broadcast close up shots of the performers for those of us too far away to see faces. It's way better than having to use "opera glasses" the way people used to have to do, though we still see those from time to time.

The screen provides some advantages to sitting up at the top. Occasionally, we get to upgrade our seats (for free) and move down to lower balcony. In front of the screens. So, yes, we're closer (much) to the stage and what's happening and don't really need the screens to see what's going on, but you don't get close ups of the performers faces with your eyes alone.

All of that to say that Ellie Dehn was excellent as Manon, and I know because we were up at the top and had the benefit of the screens and were able to see her facial expressions throughout the performance. And, sure, opera is about the singing -- she sang great -- but it has to also be about the acting or there's no life to the performance, and Dehn was amazing.

And I only bring up any of this because one of the things my wife and I do on our drive back home after the opera is look up reviews of that opera to see how the reviews compare to what we thought. Generally, reviews for any given opera are pretty similar, either everyone loved it or everyone hated it, but reviews for Manon were mixed, and they all seemed to center around Dehn. Either the reviewer thought she was great, or the reviewer thought she was flat and lifeless, which made me wonder if those particular reviews were just unable to see how expressive she was.

Maybe where you sit at an opera is more important than I previously thought?
Or maybe those reviewers went on an off night for her? It's hard to tell with live theater.
Whatever the case, we thought she was great.

Michael Fabiano, as Chevalier des Grieux, was also great, but I would say he was not quite as good as Dehn. [That's them above.]

The set for this one was interesting. It used a combination of reflective surfaces (including Lescaut's shiny pants in act one) and shadows to lend atmosphere. Mostly, it was a minimalist set design, but the frequency of the large shadows of the actors on the wall behind them made it seem as if there was more on the stage than there really was.

But the real strength of this opera, for me, was the story. Because of the necessity of music, opera stories tend toward, let's say, straight forward and tend to have one dimensional characters. It's difficult to get more involved than that when your entire piece is around two hours long and it takes a six minute (or more) song to deliver a brief dialogue that would only take a few seconds to speak. The characters in Manon, though, were suitably complex even while dealing with what could be seen as a typical tragic love story. It was engrossing.

Of course, it was also long. Three hours. AND they cut out the ballet sequence; I have no idea how long it would have been with that. By the way, did you know that the origin of ballet is within opera? Well, it is.

I really liked Manon. It's not my favorite because the music wasn't quite compelling enough for that, but I would gladly watch it again, which is something I'm finding is a measure of how much I like things.
Posted by Andrew Leon at 12:00 AM