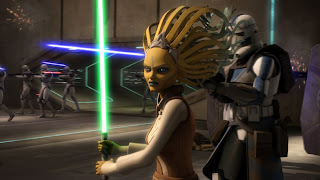 -- The truth about yourself is always the hardest to accept.


Technically, we could be through with the whole Clone Wars thing since season six was never aired; however, they did release part of it on disc, so we, of course, own it. And season six has some important stuff in it; in fact, this first arc is easily in the top three arcs of importance in the series and arguments could be made for its being the most important.

So why didn't it air?

I may have mentioned this before, but let's touch on it again.

The Clone Wars was not "cancelled" in the way that TV shows generally get cancelled. This is why season six was so far along in production when the decision was made to end the series with season five. See, Clone Wars was a Cartoon Network show, licensed to them from Lucasfilm on a five year contract but, before the contract was up, Disney bought Lucasfilm. Not a big deal in a general sense except that Disney has its own TV station and didn't want to be licensing out their new Star Wars property to some other network so, when it came time to renegotiate the licensing agreement, Disney made the cost too high to make it worthwhile for CN to pay it and, thus, The Clone Wars abruptly ended at the end of season five with season six production in full swing.

Why didn't Disney just move Clone Wars over to the Disney Channel?
That was about branding.
And, so, Rebels was born as a Disney channel show and Clone Wars was allowed to drop away.
Fortunately, Disney allowed some of the episodes to be completed for a DVD release.

Which brings us to the first episode of season six, as I said, one of the most important arcs in the series as it has to do with Order 66. It also introduces us to the only set of Jedi siblings that I know of. Or, at least, can think of at this moment. Also, Tim Curry as Darth Sidious! And I'd say more, but you should just watch it.


"I am programmed to resist intimidation."
Posted by Andrew Leon at 12:00 AM