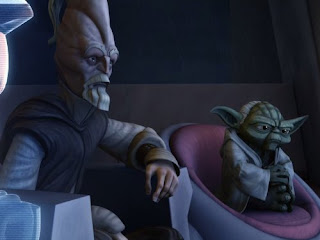 The title of this episode is another reference to an Alfred Hitchcock film: To Catch a Thief. As far as I know I've never seen To Catch a Thief, though that might not be true. There are a lot of old movies I watched as a young teenager that I don't remember anymore, and I watched a lot of Hitchcock films, so it is actually possible I've seen this one. Either way, I still get the idea they're going for from looking at the summary of the movie. It does make me wonder if "Sabotage," the first story in this arc, is also a reference to a Hitchcock film, a reference that I'm just not getting. Oh,wait, it is! And it's actually called Sabotage. I suppose I'm going to have to watch all of these again, now, or for the first time, depending. I'm pretty certain I've never seen Sabotage.

Ahsoka's on the run...
Now, let's step back a moment:
Much of the tension in Clone Wars is derived from Ahsoka and the fact that we know she's not around for Revenge of the Sith. We know something has to happen to her, which is something my kids started asking me during season one back when we were first watching the series. So what does happen to Ahsoka?

This arc is the beginning of the answer to that question, which is about all I can say without spoilers. What I can say is that this is one of the best arcs in the series. Plenty of action, plenty of drama, plenty of character development. Because, you know, anything that affects Ahsoka is also going to affect Anakin, and, more than anything else, Clone Wars is here for us to see the subtle shifts that led to Anakin's fall.
Posted by Andrew Leon at 12:00 AM