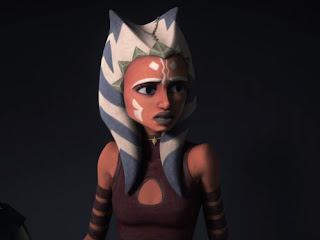 -- Courage begins by trusting oneself.

I'm sure the title of this is a reference to the Hitchcock film The Man Who Knew Too Much, but it's been so long since I've seen that movie that I don't know how the episode relates to the film.
Fun fact: The 1956 film featuring Jimmy Stewart and directed by Alfred Hitchcock was a remake of his own 1934 film of the same title. I've only seen the Jimmy Stewart version so, now, I need to watch both of them!

This is one of the most pivotal story arcs in the entire Clone Wars series. Everything changes here, and I think this story more than any other one gives insight into the fall of Anakin, though, ostensibly, this arc isn't even about him. Having seen it before, it's interesting re-watching it now and seeing how they put it together, because it feels like I should have known what was going to happen before it happened, kind of like watching The Sixth Sense for the first time.

Tarkin is back and back with a renewed agenda to cut the Jedi out of... well, out of everything but, initially, out of the clone war. Tarkin's presence in this arc is also a sign of the significance of this story.

And all of this, again, makes me really wonder where they were going to go with this series because it feels like everything before was just leading up to this stuff here at the end of season five (and the limited amount of season six that was later made available), and this stuff is great. It's intense. It's moving. It's powerful. You should watch it.
Posted by Andrew Leon at 12:00 AM