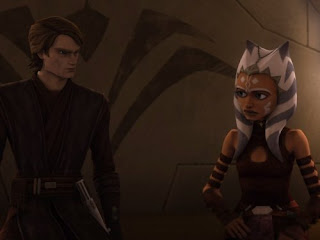 -- Never give up hope, no matter how dark things seem.

And so we get to the end of the Alfred Hitchcock-inspired titles. "The Wrong Jedi," of course, comes from The Wrong Man and has roughly the same kind of plot. I say that as someone who doesn't really remember the movie very well since I probably saw it when I was 10, but the synopsis backs that up.

If you've been keeping up, you'll know that Ahsoka has been accused of a crime she didn't commit. And set up very solidly. And no one other than Anakin believes in her. It's the kind of thing that can really shake your faith, and her allegiance to the Jedi Order is a faith.

One of the underlying conflicts of this arc is jurisdiction. It was the Jedi Temple that was bombed, so they believe they should have jurisdiction over the case; but clones were killed, so Tarkin claims that the military has jurisdiction. The result of the conflict over that is interesting, to say the least, but to say more would be to spoil the episode for you, and, really, this is an arc that really needs to be seen. Probably more than any other single event in the series, this is the one where we can best see Anakin losing his grip on what it means to be a Jedi.

But, really, it's not about Anakin, as Ahsoka very pointedly tells him: "This isn't about you."

Really, this arc is pivotal to the whole Star Wars series. Not only does it reveal to us this critical moment for Anakin, but it really puts on display how it is that only a couple or few decades later that people have forgotten the Jedi. It's not so much that they don't remember but that they turned their backs on them.

Hmm... The people turned away from the Jedi in favor of the Emperor and the Dark Side... That's something that sounds rather familiar.
Posted by Andrew Leon at 12:00 AM