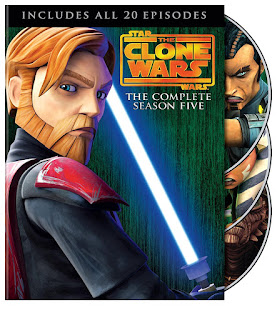 Season five of Clone Wars is almost the perfect Clone Wars season. Almost. If not for that pothole... um, actually, I think it's more of a sinkhole... right in the middle, it would be. Yes, I'm talking about the horrible four-episode arc featuring D-Squad and Colonel Gascon, the "frog general." As I'm reflecting over this particular season, I'm just left wondering, "What the f#$% were they thinking?"

I mean, look, season five starts off with a very solid story introducing us to Saw Gerrera, an arc which has a much stronger significance, now, after Rogue One, than it did when the series originally aired. It was a new perspective to go back and see it again because, though I liked the arc a lot the first time I saw it, it was much more enlightening this time.

And we follow that one with a story about younglings learning to build their first lightsabers, another good arc. True, it stumbles a bit at places, but, overall, it's good, and it gives us Ahsoka in her first guidance role.

Oh, but then! Then! I mean, where did this whole Gascon thing come from anyway? The story has absolutely no significance in the fabric of the series as a whole. It's entirely throwaway.

Then we have two of the strongest and most important arcs in the entire series. We wrap up the whole Darth Maul/Savage Opress story line, proving that the story of Opress was a tragedy (definitely not a comedy), but how could it have been otherwise? And...

And we see Ahsoka leave the Jedi. That final story of season five might be the most important of the entire Clone Wars run, though there is one arc in season six that's pretty important, too (and one that the Squid is sure to love), but I'll have to watch it again before I can decide which one I think is more significant.

Really, season five is Ahsoka's season. Three of the five arcs deal specifically with her, her growth as a Jedi, and her relationship with the Jedi Order and, specifically, to the Jedi Council. We watch her on more than one occasion choose to not follow orders in favor of doing what she believes is the right thing, something she learned from both Anakin and Obi-Wan but, possibly, more so from Obi-Wan. The season shows us that Ahsoka's story is also a tragedy.

I'm not sure I can say that you can watch season five without having watched the earlier seasons. Certainly, the Maul/Opress story arc won't make much since without the background from seasons three and four, but I think Ahsoka's ending won't have the power it should without having seen her journey. So, you know, if you like Star Wars, you really should watch The Clone Wars.
Posted by Andrew Leon at 12:00 AM