We spent two nights at Malakoff Diggins where we stayed in an actual miner's cabin that's still standing from sometime in the 1860-1880 range. 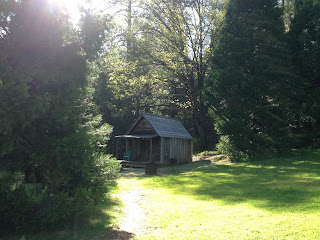 Yes, the chairs are new.
The cabin is located in what is left of the town of North Bloomfield which is located within Malakoff Diggins State Historic Park. They have camping, too, but staying in an actual miner's cabin was something we couldn't pass up. 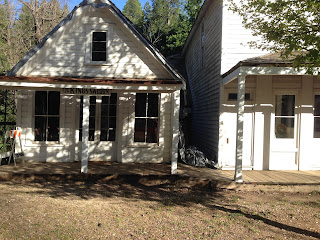 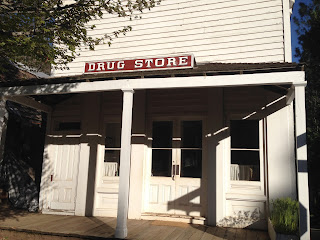 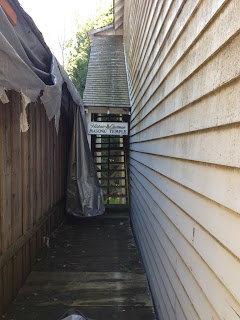 And this... Well, this is a water cannon: 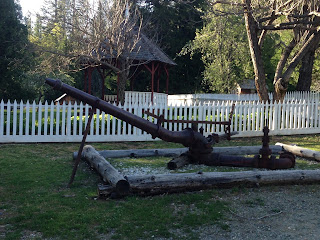 Hydraulic mining wasn't invented in Malakoff Diggins, but it really became a thing there. See, here's what happened:
You know how people thought during the gold rush that they were just going to "zip" over to California and find gold lying all over the ground and become rich? Of course, that wasn't true, but in Malakoff Diggins it was almost true. There was so much gold in the streams in the area that it took a couple of years for them to clean it all out. Except they realized there was always new gold in the streams after a rain, so they began searching around in the dirt, but that's hard work. Not that panning isn't hard work, but it's so much easier than digging around in the dirt. So someone asked the question: How do we get all of this dirt to the water so that we can sift all the non-gold away?

Which is where the water cannons came in. I'm not going to go into the whole process of hydraulic mining because the important part is that you aim the cannon at the mountain and wash everything down. Everything. 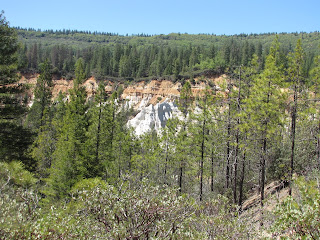 The bare rock, there, and everything below it was hydraulic mined. Prior to mining, the whole area was just like above the mining zone. All of the trees in the foreground are new growth from the last century, but let me make this clear: It's been more than 130 years since this happened, and the area still looks trashed. 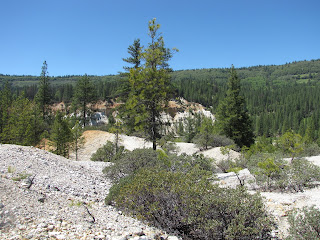 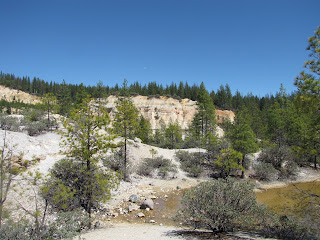 Bear in mind, these are the "scenic"pictures, because I didn't take any pictures of the really horrible looking areas, because they were horrible looking. Of course, I wasn't thinking about this post at the time, or I would have.

All of this runoff caused problems. Lots of problems. Basically, it all ended up down around Sacramento and caused all kinds of flooding and damage. People weren't happy. Someone sued. It was one of the first, if not the first, environmental cases in American history, and the result was that in 1884 hydraulic mining was made illegal in the state of California.

Let me state again: It's been more than 130 years since hydraulic mining in the area of Malakoff Diggins was halted, and the land has still not recovered!

And I just want to point out that the kind of environmental regulation that Trump wants to do could very easily lead to more environmental disasters of this nature. Thousands of acres of farmland ruined every year on top of the destruction of some of the greatest wild areas of California. But, you know, if there's profit to be gained, Trump and his ilk don't care about any kind of destruction anyone else might face. Let the future deal with that. They're too old to care what kind of results there will be in 20-30 years.

Next time: More Malakoff Diggins, but only the pretty stuff.
Posted by Andrew Leon at 12:00 AM