Writing and the Inspiration Dilemma

There are whole schools of thought about writers and inspiration and waiting for inspiration and when to write and where inspiration comes from and whether it's even necessary. As with most things, there's a spectrum here, with people who believe you should never sit down to write unless you're feeling inspired on one side, and those, on the other side, who believe you should treat writing like a job and sit down and do the work whether you're inspired or not. 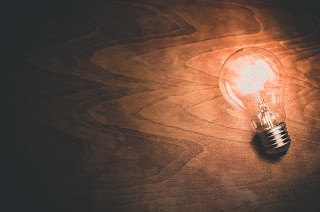 Let's take a practical look at this.

But before we go on, let me just say that I have nothing against inspiration. I like it. It's great to be inspired and have lovely (or terrifying) ideas to sit down and play with. But I can almost never sit down to do the writing when I have those ideas. I think most of my ideas these days happen when I'm in the car. You can ask my wife; I make her send me notes when I have ideas and we're not home, so she would probably know best whether that most frequently happens in the car or not. I mean, the car is not the best place to write, not if you want to live through your trip.

I used to know this guy. A "writer." He strongly believed in the waiting-for-inspiration-to-strike-before-doing-any-writing model. He talked about it a lot, actually, about how he would lean back in his chair at his desk and wait for the inspiration to come to him. Wait for the universe to open and flood his head with ideas and words. He'd sit that way for hours. If no inspiration came, he didn't do any writing. As time went on, more and more often, his posts about his writing life were only about how he was never inspired and couldn't find any inspiration and was, as a consequence, never writing.

He's not a writer anymore. I'm not sure he could ever have been called a "writer" since he has no completed work to show for his time as a "writer."

The problem is that I know a lot of people like that, people who quit writing because they relied heavily on being inspired and never did any of the work of writing. It's like this:
Writing is 1% inspiration and 99% perspiration.
And, well, inspiration doesn't come unless you're doing the work.

So you can probably guess which side of the spectrum I'm on.
The truth is that if you look at successful writers, the writers who make a living from their writing, with few exceptions, these are the people who sit down to do the work of writing whether they're "feeling inspired" or not.

Which brings me to my actual point.

The other day, I heard a bit of an interview with a "voter" about why he hadn't voted in an election. He said it was because none of the candidates had inspired him...
Wait, what?
Yes, he said he didn't vote because he hadn't felt inspired by any of the candidates to get out and vote.

Which I realized is what has bothered me so much about last November's presidential election, people complaining that they didn't like either candidate so they hadn't bothered to vote at all. These people are "voters" in much the same way as a writer waiting for inspiration is a writer, which is to say not at all.

Look, it's not a candidates job to be inspirational. It's not the campaign's job to inspire you. Sure, I get that it can help. Like I said, I have nothing against inspiration. It's great.
But that's not what voting is about!
As a voter, it's your job to make the best decision from the available candidates and to go out and vote!

For example, if you have two candidates and you've rated them on a scale of 1-10 and one of them is a 0 (because Trump didn't even make the scale) and the other is a 2 or, even, a 1, you go out and vote for the better one (not that I thought that Clinton was so low as a 1 or a 2, but I know a lot of people felt that way). You don't wait for a 7 or higher to come along and inspire you before going out and doing your job, because it is your job. If you have two candidates whom you don't like and one of them is an authoritarian fascist asshole, you go out and cost your ballot for the other candidate.

You want to know how I know? Because France just did just that! FRANCE! Dudes... if France can do it, if France can do the right thing, certainly we here in the United States of goddamn fucking America ought to be able to do the same thing. Ought to be able to.
Because, obviously, we're not capable of that, as the even more recent election of Greg Gianforte kind of demonstrates.
Seriously, what the fuck?
And you call yourselves Americans?
If the people of France can get themselves out to vote for Emmanuel Macron, a guy no one really liked, for the sole purpose of keeping Marine Le Pen out of office, then no one in the United States has any excuse.

So all of you people who didn't vote need to own up to your lack of doing your fucking jobs as citizens of the United States and get up off your asses now and register your protest against the fascist asshole "running" the country.
Running it into the ground.

Sorry (not sorry), fuck inspiration. And that goes to you "writers," too.
Do the work.
If you do the work, the inspiration will eventually come.
Posted by Andrew Leon at 12:00 AM