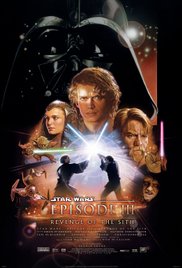 Star Wars fans of my generation (and older) tend to have an inordinate dislike of the prequels. I blame the fans. "But how can it be their fault for not liking the movies?" you might ask. "Isn't it Lucas' fault for not making something that the fans would like?" Well, no, it's not Lucas' fault. It's the fault of fans for, basically, assuming ownership of something that doesn't belong to them. Unwarranted expectations will get you every time.

I want to go back to something I said in my last post, that thing about how I never quit on Star Wars. I think this is a significant point. See, I was there when Zahn's books came out, so to speak. I bought them in hardback. Because I was into comic books, I have first printings of the Dark Empire series from Dark Horse. For a while, I was reading all of the Star Wars novels for no other reason than that they were Star Wars, and I think reading them taught me a lesson.

See, some of them... well, some of them sucked. And sucked hard. In fact, I'll just say it: Kevin Anderson's Jedi Academy trilogy was so awful that not only will I never read anything else by Anderson, but they broke me from reading anymore Star Wars novels. The lesson was not that some things that "are" Star Wars won't be good; it was about expectations. I somehow expected that these things would be great just because they were set in  the Star Wars universe. Well, I didn't really expect that, not in my head, but on some emotional level that is what I expected.

Of course, what I wanted was to be taken back to that feeling I had when I was seven when that star destroyer first "passed over my head" and made me see the world in a way I had never seen it before. But you can't have that feeling again. You can't go back to seven and experience that thing in that same way ever again. You can't have your eyes opened for the first time more than once. That can be a hard thing to learn, but Kevin Anderson beat it into me with his horrid books.

So it was that when Lucas announced the prequels I determined to have no expectations. Or as little as possible, at any rate. I knew these weren't going to be the same movies. I knew the time period they were going to be set in, and I knew what they were about. My goal was twofold: to avoid finding out stuff about the movie beforehand (because I had known absolutely nothing about Star Wars when I was seven and my grandmother took me to see it) and to not have expectations. I already knew where expectations would get me.

Which is not to say that I was not excited. I was right there with everyone else camping out for tickets for the opening midnight show of The Phantom Menace and camping again to get in so as not to have to sit in the front corner of the theater.

Also, I was in no way disappointed with The Phantom Menace. Not even with Jar Jar. He's funny. He makes me laugh. And my kids like him.

I want to make a point here: I was seven when I first saw Star Wars. I was a kid. I'm not saying that I loved Star Wars because I was a kid, but, essentially, Star Wars was a movie for young people, not for adults. There were toys because the target audience was kids. When I went into Phantom Menace, I wanted to go in with as much of that as possible. I wanted to see it with eyes that were fresh and young and with no preconceptions. Part of that was looking at it through the lens of my kids. Well, just one kid, at the time, but each of my kids has loved Jar Jar as they have come into contact with him. Lucas said Jar Jar was a character in the movie specifically for kids, and, from that standpoint, he totally works. So, really, the problem with the Jar Jar-haters is not actually Jar Jar, it's the people who hate him. And, you know what, it shows your age and your unwillingness to be a kid again, as you were when you first saw Star Wars.

And that takes me back to my opening statement: the problem with the prequels is "the fans," the original fans.
It's the truth, and you should just get over yourselves. You don't own Star Wars and Lucas doesn't owe you anything. Didn't owe you anything.
And, actually, you, all of you, should be ashamed of yourselves, because it's because of you that Lucas sold Star Wars to Disney.
/end rant

Yes, I like the prequels. Love them, even. Sure, in my list of Star Wars movies, they are not my favorite, but one of them does come in at #3, and they are Star Wars, so even the one at #6 is way ahead of most every other movie out there.

That being said, there is one problem I have with the prequels: the death of Padme during childbirth. The problem is, as it worked out, that kind of had to be the way that happened but it doesn't fit the previous narrative of Leia having gone with her mother when the twins were split up at birth, and it doesn't fit with Leia's memories of her mother from when she was a young child. So, see, despite the fact that I can see that it Padme's death is necessary from a story perspective, it doesn't work for me because of my own expectation that she should have taken Leia away and raised her in hiding for several years before her death.

But that's it. That one thing is the only issue I have with the prequels.

But more on that later.
Posted by Andrew Leon at 12:00 AM