-- If you ignore the past, you jeopardize the future.

I'm not sure if I can say this is my favorite season two story arc or not, but it is one of my favorite arcs from Clone Wars overall, which I can say because it's one of the ones I remembered best before starting to watch the series again (for this thing that The Armchair Squid and I are doing). This arc has more than a few very memorable, and important, characters/concepts/things that it introduces.

Let's deal with the obvious one first:
"The Mandalore Plot" takes us to the planet Mandalore, a place every kid who got one of those early Boba Fett figures back in 1979/80 wanted to go. Face it, Boba Fett may still be the coolest character ever to come out of Star Wars, and they really never gave us anything to go on for decades. When they finally did, it was in the person of Jango Fett, and they still told us nothing. But "The Mandalore Plot" finally gives us some background.

For one thing, the episode reveals that the Mandalorians, or at least the warriors who wore the armor, had a longstanding animosity with the Jedi. I think the implication there is that their armor suits were developed specifically to counter the Jedi, which would explain why Obi-Wan has so much trouble with Jango Fett in Attack of the Clones. And, actually, again in this episode of The Clone Wars.

Another thing we get to see is the darksaber, an ancient Jedi weapon stolen by the Mandalorians long ago. 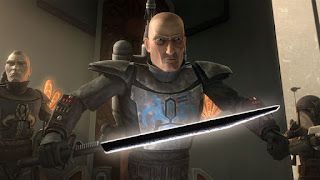 The darksaber is a cool weapon and works similarly to a lightsaber. The series never provides much background on what it is or where it came from or anything like that, but it does turn up in later episodes.

And then there's Satine. Satine is an important character for reasons I'm not going to go into yet: They'd be spoilery. However, I will say one thing: I find it completely amusing that they named the character Satine, the name of Nicole Kidman's character in Moulin Rouge. That's a hint, by the way, but that's all I'm going to say. Well, other than that she'll be back.

Oh, and the introduction of Death Watch. That's a thing, too.

Mostly, The Clone Wars doesn't contain this kind of world building. It does occasionally, but it's generally focused on characters or showing us places we've already been or creating an interesting side note that only exists for an episode or two. This arc, though, seems very foundational to me because of the depth it gives us for Boba Fett's background. You know at some point Disney is going to get around to doing a Boba Fett movie, so I would expect that at least some of this stuff from these episodes will come into play again.

Personally, I'd love to see the darksaber make it to the big screen.