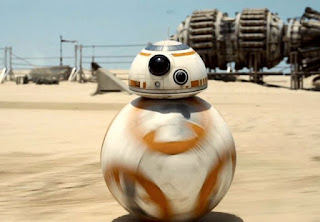 One of the big questions around my house (mostly from my daughter because she loves R2-D2) leading up to The Force Awakens was, "Why is there a new droid?" It's a fair question but one I mostly had to shrug at when she would ask it. My wife, though, gave the cynical (but probably accurate) answer of "merchandising."

However, after seeing the movie, I think the impetus lies elsewhere. This is how I imagine it going:

Abrams: We have a problem.
Disney: What's that?
Abrams: I gotta go fast.
Disney: We, um, don't know what you mean.
Abrams: That's okay; I don't either. But this movie is going to be fast! Lots of running.
Disney: Yeah, so?
Abrams: Bro, R2 is slow. He can't keep up with all the action I'm gonna throw! I need a droid we won't have to tow. It's gotta go fast!
Disney stares at Abrams for several long minutes. Abrams is virtually vibrating in his seat.
Disney: So what you're saying is that you want a new droid?
Huey Lewis music suddenly wafts through the air with the words, "I want a new droid. One that does what it should. One that won't make me feel too slow, one that'll help my livelihood." It suddenly stops and Disney smiles.
Disney: Oh! You want a new droid! A fast droid! Yes! We'll make you a new droid.
Abrams: Great! Awesome! I gotta go fast!

Yeah, that's kind of how it goes in my head. Abrams gets a droid that can roll and bounce along on the ground with Rey and Finn as they run like crazy and Disney gets a brand new cute droid to merchandise the hell out of.

But, you know, BB-8 is a fine addition to the movies. He rather subverts R2's  observational role but, hey!, Disney has subverted many things with their whole "making a movie for the fans" thing. He, the droid, was fun, and that's what counts, right?

However, not all of what made it into The Force Awakens works so well as BB-8, Starkiller Base, for instance. Setting aside the fact that this is part of the whole repetitive story issue (but seriously! again?), how does this even work? It's like they forgot to think the whole thing through (but at least it's not as bad as "red matter" (because, really, "red matter" was the best you could come up with, Abrams?)). I can be okay with them building a Death Star inside of a planet, but there are... let's call them inconsistencies:
1. Starkiller Base destroys the Hosnian system. Where did it get the energy for that blast? You're not going to convince that it "came loaded with one shot already available." Sure, as my wife pointed out, maybe it was a binary star system, but that doesn't ring true to me. It still had an atmosphere and plant life on the surface, so it hadn't come from some other system first. It had to be still in its home system.
2. The Star Wars database says that the beam from Starkiller Base travels through hyperspace, which explains how it gets to Hosnian Prime so quickly. But, if it's travelling through hyperspace, why can we see it? Come on guys; that's just not cool. Don't break the rules just because you want everyone to watch the beam go by and be all "oooh..." at it.

Oh, and see, I had to go to the Star Wars database to find that out about the beam going through hyperspace (because prior to looking, I was miffed that the beam shot across the galaxy in seconds), which is something something that irks me. I shouldn't need to go looking outside the movie for explanations of things inside the movie. Like the thing with Ren's lightsaber and why it's built that way (because there's an actual reason beyond it looking cool). That's one thing Lucas did very well: He gave us all the information we needed within the movies. And you might say that knowing why Ren's lightsaber looking the way it does (and I mean the flame-like appearance of the blade, not the cross-hilt) is not necessary, but an aberration like that popping up after six movies of lightsabers not looking like that begs the question. I shouldn't need to go out of the movie to find "why?"

And, yes, maybe that info will come in backstory in the next movie. Who knows. If that was the only thing, it wouldn't bother me, but that's just a prime example of a lot of things in this movie where Disney put the information in some other medium so that you have to buy a book or a comic book or whatever to find out. Irksome. And damaging to the integrity of the movie.

The other big problem I have with the movie is that everyone knows everything right away all the time. It's very un-Star Wars. I mean, the search for the droids by the Empire in A New Hope is part of what gave the early part of the movie its tension. But in this one, everyone knows that BB-8 is BB-8 as soon as they see it, and the First Order just shows up. But, you know, gotta go fast! It's not restricted to the First Order, though; it's everyone all the time. Rey and Finn steal the Falcon: Han shows up. [I'm sorry; there's no good explanation for that.] Then both rival gangs show up. Not to mention the Resistance showing up to take down the First Order when they're attacking Maz's place. There's just too much everyone knowing everything and/or coincidence.

And don't even get me started on the whole "map to Luke Skywalker" thing. Why is there a map to a person? And how exactly is that bit of the galaxy "uncharted" when it clearly fits within a map of the entire charted galaxy. Oh, wait... I said don't get me started. Oops.

So, yeah, I like the movie, but I'm not in love with it the way I am with the rest of Star Wars. Not right now. I'm sure it will grow on me but, right now, it's like the one kid who is constantly getting into everything and you keep having to say "stoooop!" to. You love the kid, but you just wish s/he would go away for a while and quit making noise. And, yes, darnit! I want to go see it again.