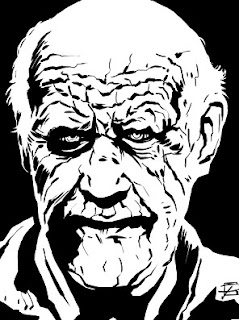 "The Terrible Old Man" might be the most normal of Lovecraft's stories, the most "normal" one I've read, anyway. Which is not to say that it's not a horror story, but it's not a weird, tentacled monster horror story.

This is going to be all spoilery, by the way, because the short story is quite short, and there's no way to talk about what I want to talk about without giving it away. But you should still read it because 1. it's short, and 2. it's that good.

I'm not saying that Lovecraft invented this type of story, but this is certainly the earliest example that I know I've read of this type, the type where the perpetrators become the victims.

There's an old man, an ex-sea captain, who lives alone and is rumored to have vast stores of treasures. Or something. No one really knows because the old guy keeps to himself and everyone is afraid of him. But, then, three new guys arrive into town, hear about the guy, and decide that they will rob the old man. They'll torture the location of the hidden treasure out of him if they have to.

Except one of the guys, the driver, isn't too keen on the torture part, so he tells his two buddies to go easy on the old guy. And that's the last he sees of them as they head to the house and he waits in the car. Not long after, he hears screams coming from inside the house and assumes it's the old guy... until he finds the old guy staring at him from the gate with a wicked grin on his face.

Now, one of the things I read about this story is that it's a prime example of Lovecraft's racism... wait! What?
I'm sorry; I just don't see it.
Yes, the men from out of town are "foreigners" in that they are not from the small town where everyone knows about the terrible old man. You have to outsiders come in who don't know any better. I think you have to read awfully deep between the lines to turn this into some kind of warning to outsiders to stay out.

Or maybe I just don't know enough about Lovecraft.
However, not knowing more than I do, I say this is a really great read.
Posted by Andrew Leon at 12:00 AM