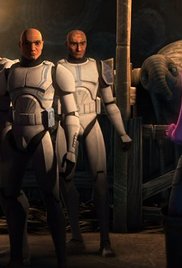 -- It is the quest for honor that makes one honorable.

"The Deserter" finds Obi-Wan hot on the trail of Grievous from the previous episode. Yeah, Obi-Wan and Grievous have a particular animosity for each other, and Kenobi really (I mean really) wants to -- well, I'd say he wants to capture Grievous, but I don't think it much matters to Obi-Wan at this point. Dead is as good as alive -- beat the virtual snot out of Grievous.

But that's not really what this episode is about. Obi-Wan's pursuit of Grievous is just the backdrop to the actual story, which is a further exploration of the differentiation of the clones. During the search for Grievous, Captain Rex comes across a clone who had deserted from the army some years prior, long enough ago to have young children with his twi'lek wife. Rex assumes that the man is a coward.

Of course, the story is more complicated than that, and the deserter proves his bravery when his farm is attacked by a squadron of commando droids. The whole thing shows Rex that things aren't always what they seem, but it's also a lesson on personal choice as Rex realizes that he chooses to be in the army. It's not a default state for him but an active choice.

There's plenty of action in the episode, but it's the philosophical nature of it that makes it enticing. The episodes that get into the nature of the clones, especially the ones that have to do with how they view themselves, are always worth watching. This one is no exception.
Posted by Andrew Leon at 12:00 AM