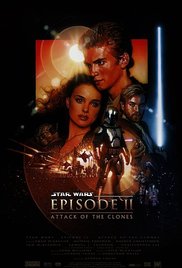 No, we're not actually up to The Force Awakens, yet. Don't worry; we'll get there.
Eventually.

When my oldest son was not quite two, my wife gave me the boxed (VHS) set of Special Edition for Christmas. My son was not a TV watcher; I mean, we didn't even have TV (still don't). He wasn't (yet) a video watcher either. He wasn't even two and we didn't really have any videos for him to sit and watch. When I put A New Hope in to watch it, it didn't occur to either of us (my wife and me) that he would pay any attention to it. But he did.

He sat down and was mesmerized by it and, when it was over and he got up, he was someone different. He was Luke Skywalker. I'm being serious. He got up and immediately began running around the house as if he was Luke. It was, quite frankly, amazing. By the time we'd watched the full trilogy, the transformation was complete.

Amusing story time:
Those of you with kids will know that two-year-olds aren't the best talkers in the world. Well, ours started saying "fuck" to us. That, also, was amazing and a surprise, because we couldn't figure out where he'd heard it, since we didn't use that kind of language around him. But he'd run into the kitchen and yell "fuck!" and run out again and, really, just leave us bemused. So, one day, he and I were at Target together going through the toys (because I was still collecting Star Wars stuff at the time and, actually, the kid was starting his own collection, too). As we went down one of the aisles, he began yelling "fuck! fuck!" over and over again. People were looking and I was, frankly, embarrassed. I was trying to shush him and sped up to get off the aisle then, as we rounded the corner at the end, he started pointing, too, and stating "fuck!" even more emphatically. And, so, I looked to see what he was pointing at: an endcap display of Millennium Falcons. The "fuck!" That was all he could say of it. It was one of those "oh" moments and it all made sense.

Still incredibly embarrassing, though, because you can't go to everyone and explain to them that your two-year-old is not really swearing, as if they'd believe you anyway, right?


My oldest son was old enough to see The Phantom Menace in the theater when it came out, though he doesn't remember it -- he was only three, after all -- but my second son was released right in the middle of the trilogy. Oh, um, I mean, he was born during the midst of the prequels. He was a great baby, and we could take him to any movie with us, and he would sleep right through it. We couldn't take our oldest son to many movies, because all he wanted to do was get up and walk around. Star Wars was an exception. But, for the first year of his life, we took the second child to all of our movies with us, including Pearl Harbor, which we were sure was going to wake him up it was so loud, but he slept right through it. That lasted right up until May of 2002.

Don't get me wrong, Attack of the Clones was fine. He didn't sleep through it, but he also didn't fuss. What we didn't know was that our one year and change baby was watching the movie. How do we know? Well, sometime after the release of Clones, my wife and I had gone to see some movie that wasn't Star Wars. I don't remember what movie it was, but it was a date movie, and we took the younger boy with us because he had always been fine in movies. Not this time, though.

No, for that movie (whatever it was), he started crying and fussing almost as soon as the movie started. It was unprecedented.

So I did what any good person should do and I took my son out of the theater leaving my wife to watch our date movie alone. I wandered around the theater for a while holding him. When he finally calmed down, we tried going back to the theater but, almost as soon as I sat down next to my wife, he started back up again. After a couple of times of that, I gave up on going back in and had decided to just stand around in the hallway until the movie was over... except that Attack of the Clones was showing in the theater across the hall, so I decided to go just inside the door to see if I could watch a bit of that.

And this is where it gets interesting because my son, my son who was just over a year old, sat up to watch the movie. He almost instantly became totally engrossed in it. But it's hard to tell things with babies since they can't actually communicate with you, so I decided to experiment with him. Yes, I did an experiment with kid. I walked back to the movie I was supposed to be seeing where he immediately got upset again. Then, I went back to Clones where he started watching again. I went into every other movie in that hall, about half a dozen, and he got upset in every one of them. Attack of the Clones was the only movie he would watch. So, well, we sat down and finished the movie, and he sat quietly and watched the whole thing. By the time it was over, I only had to wait for my wife for about 10 minutes.

For the record, that was the last time we took him to the movies with us. Well, until Revenge of the Sith came out, at any rate.

I don't have any stories like that about my daughter, but she is as fully immersed as the boys at this point. She loves R2-D2, Wicket, and BB-8.
Incidentally, they are watching Return of the Jedi as I finish this up. My wife and I have been out, and they were watching it when we got home. That's the way our house is.

Next post, we'll start into The Force Awakens.
Posted by Andrew Leon at 12:00 AM