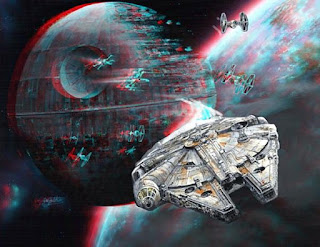 My first 3D movie was way back in 1983, Spacehunter: Adventures in the Forbidden Zone. I can't say I thought much of it. What I remember is the movie being pretty terrible and the 3D being blatant. What I mean by blatant is scenes where something comes right out at you for no other purpose than coming right out at you to show off the 3Dness of the movie. That's not always a bad thing, but it usually is. Probably the only significant thing about this movie is that it was Molly Ringwald's first "big" movie, right before Sixteen Candles. It did not make me ever want to see another movie in 3D, though.

That was a thing I pretty much succeeded at. At least, I can't think of any other 3D movies I saw through the rest of the 80s. It lasted all the way up to U2 3D, which came out in 2007 in Real 3D. The U2 concert movie was the first to use the Real 3D technology and, frankly, it was amazing. At times, it felt like you were in the arena, the show was so immersive. And that's probably about as close as I'll ever get to seeing U2 in concert, so I was glad to have seen the movie in the theater.

Of course, it was quickly followed by other movies using the technology: Journey to the Center of the Earth, Coraline, and who knows what else since 3D quickly became a "thing" and Real 3D faded into the sea of new digital 3D technology. However, I was hooked. Unlike the old red/green 3D thing, the new 3D stuff, when done well, could make you feel almost like you were in the scene.

However, it didn't take long for theaters to raise the prices on the 3D shows high enough to make them not worth it. Not when you have a family of five, at any rate. So, except for special exceptions, we don't do 3D movies anymore. One of those exceptions was the re-release of The Phantom Menace in 3D but, rather than talk about that here, I'll direct you to my review of that.

In relation to The Phantom Menace, I have to say that I was upset when Disney called a halt to the 3D conversion of the other Star Wars movies. Star Wars was made for 3D. The Force Awakens just reinforces that. So, yes, we went to see Episode VII in 3D. I think that's the first 3D movie I've seen since we saw Episode I in 3D back then in 2012. The 3D experience of Force Awakens was amazing.

It's not because there are things flying at you and being blatantly 3D in your face, either. I actually don't remember anything like that in the movie. With Force, it's all about the environment and how much more rich and interesting it becomes in 3D. The 3D actually allows you to see more of what's in the movie, like steam being released from the Falcon after it lands, than you can see on the flat surface of the 2D presentation. It was... impressive.

Which is not to say that the 3D is perfect. There are still issues when a character is in the foreground but not completely onscreen. That can give a sort of warped appearance as the character is both coming out of the screen at you and being framed in by the wall. But those instances are few. I suppose until movies are actually holographic VR presentations, there will be some issues, but The Force Awakens is the best 3D I've ever seen. Not that I've been watching much 3D but, as I said, but, still...

The short of it is that, if you have opportunity, you should check this one out in 3D. It's worth it. And I hope Disney resumes the conversion of the other five Star Wars movies into 3D. Just... well... I want to see the trench run in 3D. That would be amazing!
Posted by Andrew Leon at 12:00 AM