There are topics we all avoid talking about. Not that we all avoid the same topics, but we all have topics we avoid. The topic of Bill Cosby is one I have been avoiding for a good while now. And, maybe, I wouldn't feel like I have to avoid it if I hadn't mentioned him on my "Of significance..." page, but he's there, and what we know about him now doesn't change the impact he had on me when I was younger. It does make me feel squiggly about having him listed there, though, but it seems worse to me to try to pretend that he did not impact my childhood at all. 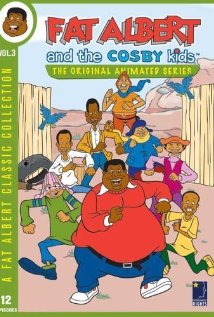 which I watched on Saturday mornings when I was little. "Little" meaning five and under. It wasn't a favorite, but I did watch it. I did not have an awareness of "Bill Cosby," though; it was all about Fat Albert.

But, when I was seven or so, my cousin shared with me his collection of vinyl Cosby records. We would sit in his room and listen to them for hours and laugh and laugh and laugh. My cousin had memorized all of the Noah skits and would spontaneously break into the routines anywhere he thought it was going to get him some attention and some laughs. Incidentally, it was while listening to those records that the Fat Albert thing clicked into place, and the stand up routines on the records were so much better than the cartoon. I never really watched it again after that.

The big moment was when I was in middle school and Bill Cosby: Himself aired on HBO. It was a Saturday morning the first time I saw it, I was the only one up, and, actually, I have no idea why I was watching that instead of cartoons. I got up early on Saturdays for the sole purpose of watching cartoons, but, for whatever reason, that morning I did not; I watched Himself.

I laughed so hard at the part about going to the dentist that I woke my parents up and my mother thought I was dying. At least, that's what she said. The show was brilliant. I own it on VHS. Hmm... yeah, I still own it because, as I said, I've been avoiding the topic.

A few years ago, I pulled it out and showed it to my kids for the first time. It was one of those here's-something-I-loved-as-a-kid things, and I want to share it with you. They, of course, loved it. "The beatings will now commence" was heard around the house for weeks, and there are still mentions of the chocolate cake for breakfast.

And, now... Now, I just wish I had never shown it to them at all, which makes me sad in ways that I can't express.

Fortunately, I never really watched The Cosby Show. I had already quit watching TV by the time it was on the air. Sure, I'd stop and watch a few minutes of it if it happened to be on when I was walking through a room, but it wasn't a thing I did. My high school years were largely devoid of TV. Small mercies, that.

When the rape allegations came out, the best description of what I did was holding my breath, just hoping that they weren't true. It's one of those things where you know the opposite of what you want is going to be the reality, but there's no proof, yet, so you just hope. And hope...

Of course, now, we know that he admitted to all of this years ago. He admitted it, and no one did anything. No one did anything. No one did anything about it at all. Not for the women he'd already raped and nothing to stop him from doing it again. Excuse me, but what the fuck? And, probably, although there's little chance he'll be able to get away with doing this again the future, nothing is going to happen to him now. Okay, yeah, his reputation is ruined, which might be the worst punishment he could have, but it's probably not the justice his victims want. Or most of us.

For me, the worst thing is that, at some point (soon), I have to sit down with my kids and have a conversation about this. Probably with that VHS tape sitting on the table right before we throw it away.

But I can't erase the impact he had on younger me and, unfortunately, it doesn't make his comedy not funny. It's one of those places where you have to separate the art from the artist, to some extent, and just cope the best you can. The worst part is that he did actually do a lot of positive things, especially for education in the black community and, to a large extent, this completely undoes all of that.

I don't really have a conclusion to this beyond what I just said. It's just that the fact that I have Cosby listed as one of my influences as been gnawing at me, so I felt like I needed to say something. I'm not going to remove him from my list -- that would a lie -- but I will add a link to this post for any future readers.

To say that I am mad would not be inaccurate, but, mostly, I'm just sad. And confused. I mean, assuming it's the truth (which I doubt since he also did stuff to hide his expenses in regards to the women from his wife) that he and his wife had an understanding, why would he need to resort to drugs and rape? He was Bill Cosby! I'm sure he didn't need to force himself on women. That he did is just... unfathomable to me.
Posted by Andrew Leon at 12:00 AM