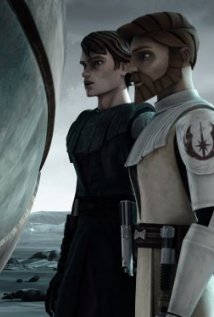 -- The winding path to peace is always a worthy one, regardless of how many turns it takes.

I think I can safely say that this is my favorite episode, so far, of the first season. That, in and of itself, is interesting to me, because, while I remembered this episode from my first watching of the series years ago, I didn't remember any of the things about it that made me love it so much this time.

One of the purposes of showing us the Clone Wars, according to Lucas, is so that we can see the relationship between Anakin and Obi-Wan and how close they were. So that we can see the betrayal and, actually, trauma involved for Obi-Wan in the confrontation on Mustafar. Obi-Wan says, "You were my brother!" But we really have no experience of that.

This episode gives us that experience. It's the first Anakin/Obi-Wan episode, since almost all of the other episodes have really revolved around establishing Ahsoka and her relationship with Anakin. This is a full on Anakin/Obi-Wan adventure, and it's pretty awesome.

It opens in the middle of a plot to capture Count Dooku which involves Anakin allowing himself to get captured. Then, Obi-Wan comes to rescue him, which is where we pick up the story. There's an immediate argument between the two about why it is that Anakin is the one that always has to be the one to be captured. It's really a classic sibling argument, and it had me chuckling. But it gets better.

As soon as they finish the argument, they come across Dooku and he makes a comment about how Obi-Wan has had to come and rescue Anakin. Again. They don't show it, but you can just about imagine the eye roll going on with Anakin.

Dooku escapes, by the way. The title of the episode is not precisely what you might think.

Anakin and Obi-Wan spend the whole episode bickering and, well, acting like brothers. It's a nice dynamic and provides some good moments. Plus, there's the continued banter, started in Attack of the Clones, about Anakin and his inability to retain a lightsaber.

This episode also introduces another of my favorite recurring characters: Hondo Ohnaka. Hondo is a Weequay pirate who Obi-Wan and Anakin run into from time to time. Or maybe I should say they have run-ins with him from time to time. At any rate, Hondo and his band of pirates are always good for a bit of amusement.

This is a great episode and one that doesn't carry over any previous story lines, so it makes a great jumping in point.


"They are devious and deceitful. And, most importantly, stupid."
Posted by Andrew Leon at 12:00 AM