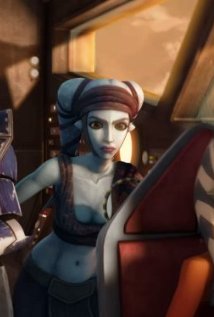 -- Greed and fear of loss are the roots that lead to the tree of evil.

This episode opens with one of those huge, spectacular battle sequences. We don't get those all the time in Clone Wars because, I'm assuming, of the time and expense in producing them, which, I know, sounds weird for animation (it's just coloring, right?) but is true nonetheless. And I do understand that they're "just animated" (but, after all, that's what CGI is, too, and this stuff is basically the same), but they're still spectacular.

This is another episode which features on a fan favorite Jedi from the movies: Aayla Secura. I think when you look at the character, you can easily identify why she's such a favorite. heh

This is an interesting episode in that Anakin and Ahsoka are coming to Secura's aid, but Anakin is badly wounded and it's Secura and Ahsoka who have to rescue him. Amidst many, many complications. Including incorrect hyperspace coordinates which, as Han Solo told us, can lead to flying right through a star. Um, yikes! Because that's right where they're headed.

This episode centers on a philosophical question, which the series does from time to time:
Does fighting for peace justify fighting? As one of the characters says, "It takes two to fight." It is a legitimate question with no good answers. After all, Jesus said, "Turn the other cheek." It may be something that's easier done by an individual rather than by a whole society, though, because how can you choose to let an aggressor subjugate or enslave a group of people unopposed? The show doesn't try to answer the question; it merely poses the conflict between the two ways.

I think that's the mark of a good show, though: It poses the questions and doesn't try to tell you how to think about it, just that you ought to think about it. So, yeah, what if someone did a throw a war and one side just didn't show up? Is that even a possible thing? Maybe not, but maybe it could be.
Posted by Andrew Leon at 12:00 AM