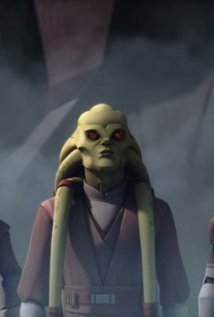 -- Most powerful is he who controls his own power.

Generally speaking, we travel through the Clone Wars with Anakin and/or Ahsoka. Frequently, Obi-Wan is around, although he isn't so often the focus, though we do get some of those episodes. Only rarely do we depart from those characters entirely. This was one of those episodes.

The Jedi are still after the escaped prisoner from the previous episode, but it's Kit Fisto who has picked up the trail... right to Grievous' lair. Like his own private hideout. Which is, not surprisingly, mostly a monument to himself. Seriously, Grievous has statues of himself in his lair. And all the trophies from all the Jedi he's killed.

But who's the trap for?

Continuing with the theme of betrayal, we get to see it from the other side in this episode. But, then, that's how the Sith operate.

We also get to meet the former Padawan of Kit Fisto, Nahdar Vebb, now a Jedi Knight. Vebb is also Mon Calamari, so the only thing that could have made this episode more complete would have been for Vebb to have said, "It's a trap!" Alas, he did not say that. He does provide us with a lesson of why Jedi strive not to give into the lust to use power, though.

As what amounts to a standalone episode, this is a very good one. Not only do we get to see Kit Fisto in action, but we get some pieces of Grievous' backstory. And we get to see him at his toughest, when he's cornered. There is a reason he's killed so many Jedi.