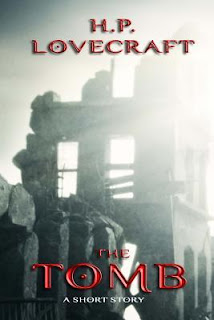 "The Tomb" is Lovecraft's first published fiction. It's also the earliest written of all of his published works. It shows. Lovecraft has a tendency toward wordiness as it is, which works well in most of the stories I've read so far. His words, his many words, set the tone and give his stories a certain weight they wouldn't otherwise carry. However, he's not able to pull that off with "The Tomb."

"The Tomb" opens more as preachy than descriptive. It's Lovecraft giving us a philosophy of life that I have to believe is his and that, to some extent, this particular character is his representation of himself. He's a character obsessed from childhood with a tomb on the property on which he lives. The tomb is locked with a huge chain, but the door isn't quite closed, which taunts him because he can almost see in, but he can't get in.

The rest of this will have spoilers. You've been warned.

The kid grows up with a habit of sneaking out of the house at night and sleeping outside of the tomb door and dreaming strange and weird dreams. Which lasts until he gets old enough to suddenly know where the key to the lock is hidden. Yes, one day, he just knows.

From that point forward, he goes down into the crypt each night and sleeps in a special, empty coffin and gains all kinds of secret knowledge that cause him to become even more estranged from his family and the people in the town.

Still, if you want to get the full Lovecraft experience, I think it's instructive to see his progression, so the first story he wrote is essential to that. Otherwise, even though I've still only read a handful of his stories, there are certainly better ones out there and this one can be skipped.
Posted by Andrew Leon at 12:00 AM