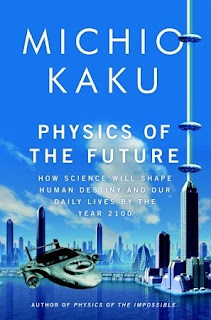 For me, Physics of the Future was a bit of a research project. I have a couple of different sci-fi things in various stages, and I wanted to see how this stuff lined up with what I'm doing. As it turns out, pretty well. Although, I have to say, I do disagree with a few things, not that I'm the expert, though. Kaku is the physicist. However, I think the idea of a "space elevator" is a fantasy, and I don't really understand why people cling to it so hard.

Having said that, I do know that it's fantasies (ideas) that turn a lot of "science fiction" into plain old science. I did, after all, do a whole series on that during A-to-Z a few years ago.

So the premise of the book is that Michio Kaku, a theoretical physicist, would look into the actual science being developed today and, based on past progress in developments, make a projection (prediction) about the kinds of things we can see in the future. Assuming we, as a race, live long enough to see those things come to fruition. And, yes, he talks about that "if," too.

For me, Kaku spent too much time dwelling on the future of medicine. Not only does medicine get its own chapter (chapter three), but it's laced throughout the book. I get it. I do. People are concerned with medical advances that can allow them to live how they want to live with no negative consequences, and, actually, some of the research currently underway might make that possible. It is entirely possible that my generation will be the last generation to die and that the next generation (my kids) could have potentially unlimited lifespans. There's even an outside chance that some of those developments could happen before the end of my generation, but that would require a remarkable breakthrough and, still, probably only be available to the fabulously wealthy. Kaku is considerably older than me, so I can understand the focus. Still, he covered the same ground about early cancer identification at least half a dozen times.

The other thing he spent too much time on was magnetism. Kaku seems quite enamored of the idea of telepathically controlling the environment through the use of superconductors, and he refers to this a lot during the course of the book (much like the nanomachines which will detect cancer). The problem is that this relies on the accidental discovery of something which may not actually exist. Our current generation of superconductors weren't developed, they were happened upon, and he bases much of his magnetism predictions on serendipity.

He also seems to be overly optimistic about the future of mankind, at least from my perspective. He spends a considerable amount of time explaining why the "singularity" won't happen or, if it does, why we'll be able to control it. He makes a point about how, one day, the most sought after thing on the Internet will be wisdom, this after stating how humans are essentially the same as they've been since we became human. He expects ranting bloggers and funny cats to disappear as we all become enlightened, and I think he's been watching too much Star Trek. And that he doesn't really know humans very well if he thinks we (as a group) will give up funny cat videos. And blogger rants.

However, all of that said, the book is fascinating. The technology discussions are fascinating. And the chapter on the future of wealth is extremely fascinating. The unstated comparison of the US to the Ottoman Empire is especially compelling. Nutshell: At one point, the Ottoman Empire led the world in science... until it gave all of that up to embrace religious fundamentalism. Let me re-state that: At least 50% of America's leading scientists have come from other countries and more and more of them are, instead of staying here, returning to those countries after they've received their education. America, because of the deplorable state of public education, is not producing sufficiently educated people of science. It's not our focus anymore.

If you're at all interested in the book, now is the time to read it. Only four years away from publication, and parts of it are already becoming outdated. The section on self-driving cars is a good example. Current projections are that self-driving cars will be as common as smart phones within the next decade; Kaku doesn't really expect them to start even showing up until around 2030. He makes no mention of quantum communication and only mentions quantum computers as an unlikely option. IBM has just developed a computer chip that could completely change the computer industry. Warp fields have been created, too, another bit of science Kaku glosses over as being the least likely of options.

Still, it's fascinating. Even the stuff about the space elevator, but that's mostly because he spends time talking about carbon nanotubes during that part, and carbon nanotubes, if we can figure out how to make them long enough, are another technology that could completely change the world.

Of course, the drawback, even though Kaku has made it very accessible, is that it's very heavy on science. Well, it's all science, so I can see it being difficult for some people to get into. For whatever reason. But, you know, if you're writing any kind of science fiction, right now, this might be a book you want to have on your desk.
Posted by Andrew Leon at 12:00 AM