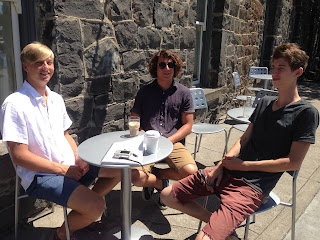 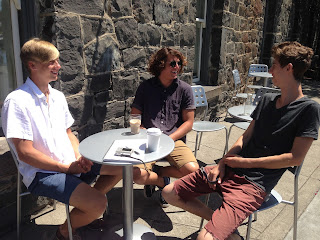 It's really difficult to do something like make introductions in the middle of any kind of live performance. After I asked the bassist, Delek Miller, about doing an interview, about which he was very excited, he rounded up the other guys so that we could figure out when. We did manage to do that, but I didn't really get their names at the time, except for Delek's, because he put it in my phone. All of that to say that proper introductions did not get made until the following Monday when we met for coffee at my favorite cafe, Flying Goat. [Seriously, I love Flying Goat and am thinking about doing a piece about them at some point. They have this spicy mocha thing which is the veritable bomb.]

The first thing to note, and this really surprised me, is that these guys are, and there's no other way to say it, young. Delek and Elliot just graduated from high school, are both 18, and are heading off to separate colleges. Stav, at 17, is still in high school. Based on the quality of their music and the fact that they were performing original material, I had expected them to be older. It makes them, as a group, all the more impressive. Also, I suppose technically, the band is actually only Delek and Stav. Elliot plays the violin in some of the songs, but he's not fully integrated as part of the band despite the fact that Delek and Elliot are best friends and have know each other for eight years or so. It's no coincidence that their friendship began with music and has been the center of it all along.

Actually, nearly everything about this group is surprising to me. Considering how young they are, you have to wonder (or, at least, I did) how long they've been "together." When did the band start? Now, see, considering how good they are, I expected the answer to be something like, "Oh, we've been doing this since we were freshmen," or something like that, but, no, they've only been playing together as a band (meaning the length of time since Stav and Delek started doing all of this) about a year. A year!

Which might not be so surprising just for the ability to play songs together, but they've been together for only a year, and they have all this original material. Good original material. Actually, good is an understatement. At any rate, I had to ask about that:

Me: How did y'all get started on doing original material so early? ...Y'all are right out the gate original stuff, and I'm really curious about that.

Stav: I started off in fifth grade kind of playing covers, doing the thing, all the pop kind of covers, and, then, comes about eighth grade and you hit puberty [everyone chimed in knowingly at this point and there were comments about girls (when I say "everyone," I include myself)], so I said I don't want to play just everyone else's stuff. I don't want to cover all the time, so I started to write songs. I had a bunch of ones I think now are just the cheesiest things ever [Me: It happens.], but you go through the cycle, and I started finding ones that I really liked. When we all started to play together I had two or three songs already written that we still play today. I brought them to the band and they liked them and, from then on, we started writing together. Delek would bring me a bass line, or a guitar line for that matter because he plays both, and I'd be, like, "cool," and then I'd come up with the melody, put some lyrics in there and, then, Elliot does his thing, so it all comes together.

Delek: For playing together and writing original stuff, we just started playing and, then, I knew that [Stav] wrote songs and he kind of was a little...

Delek: ...shy about just going for it, so I said, "Just do something." So we did one song just like that. I told him to just moan or just mumble, and it just happened. Personally, we've all just liked his original stuff. Covers are really fun, too, but I like doing the original thing. I like the creative process. And I think they share that, too.

The conversation moved from there to musical influences, which I would like to cover here, but I'm going to pass over as it would just end up being a list of bands and musicians that I mostly can't offer an commentary about. At some point, I might revisit the subject with them in a way that will allow me to turn it into a more interesting subject, because there are a people on the list that stand out even to me.

Eventually, we got to this:

Stav: I want to play music for my career. I don't want to do anything else.

Me: Well, you've got a good start. Not many people your age are doing what you're doing.

Stav: As far as where I want to go, I am going to obviously have a plan B. Producing interests me. Psychology interests me. So I'm going to go to school. I'm going to get a major in something. But, as far as band and music goes, I'm just going to keep writing because I love to be able to express that part of myself and share it with whoever wants to listen. And just keep playing music until something happens or, if nothing happens, still keep playing music. That's my plan. I don't have an expectations. I'm not, like, "Oh, my God, if this doesn't work out, I'm going to kill myself." It's very much like "what happens happens," and if nothing happens, I'm going to keep playing music. As far as playing with these guys, it starts off with touring and playing live, recording when we can, spreading the word, letting as many people know as we can about our music, where we're playing, all that kind of stuff. As far as long term, I want to do this. I found a group. I've never played with anyone that, kind of, gets me as much musically as much as Delek does. We have a good sense of the genre we want to play and it fits and it works. We write really well together, and we play really well together. Same with Elliot. Elliot brings a whole, really cool, unique aspect to the group that I think is great to have. To be honest, some songs don't need violin, but a good chunk of them do, so it's good to have that option. [Delek and Elliot] just wrote a song together, recently, and brought it to me...

Stav: Instrumental, verse, chorus kind of deal, but, like, immediately, I was able to find a melody and some lyrics...

Delek: And that's on the spot. Like five minutes.

Stav: That's the kind of stuff I want to be doing all the time. And I don't care if I'm in a studio from 5:00 in the morning to 10:00 at night. I want to do this... As far as I'm concerned, the music is all that matters. Bringing joy to other people. As long as other people like it and I'm enjoying what I'm doing. I'll never write or play music I don't enjoy. I'm solely in it for the music. That's what I've found about Delek, too; he's willing to make sacrifices for the sound, no matter if he has to step back a little bit, hold out boring notes on his bass, he knows when to bring stuff in and when to pull stuff out. It doesn't matter who is in the background or who is in the foreground; it's all about the music, and that's what I love about playing with these guys.

Where I want to go? I want to keep playing with them. We've found something that not very many people get to find. It's one of those things to know when you've found something really good. Like someone who really gets what you're doing, and you really get what they're doing, and the approach is really harmonious. Also, I really like producing. I mean, I want to produce. Even if I'm in a band, I'll still produce on the side. If the band doesn't happen, then I want to produce as a career. But I want music... I need to be in music.

Elliot: I've wanted to play violin since I was two years old, and I don't mean that at all as something to brag about. I started at five so, basically, it's just always been a part of me. That will never stop; I will always continue playing.

I'm going to cut this post off at this point, mostly, because it's long enough. Next post will deal with the name of the band and how it relates to the other big question I asked them. And, just to be clear, Elliot did talk during the interview, but, since I'm not just transcribing it, I've cut out most of the side comments to keep the essential information concise. Which sounds like he didn't say anything essential, but that's not true, either. Often his comments were agreeing with someone else or expanding on something someone else said, but I can't include everything. That's why there will be another post. And, actually, another one after that.

For now, I'm going to leave you with one of their songs. This one is probably my favorite one. Just follow the link: "Left Behind"
Posted by Andrew Leon at 12:00 AM