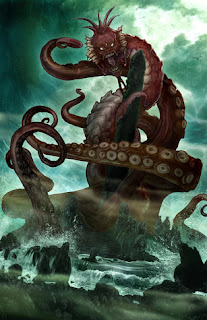 Having already read "Call of Cthulhu," it's easy to see that this story, "Dagon," is an earlier iteration of Lovecraft's most famous story. In many ways, "Dagon" reads as an early draft, just an early draft that ended up published. Clearly, this idea of a massive body of land rising from the depths of the ocean floor was not one Lovecraft could get out of his mind.

Even with the similarities, there are things about this earlier story that I think work better. "Dagon" is about a man lost at sea. He's drifting alone in a little boat in the middle of the ocean and certain that he's going to die. Upon waking one day, he finds that his boat is no longer drifting but has struck land. Except that it hasn't "struck" land, because, when he sits up and looks around, he finds that the land has risen up under him and his boat is stranded, land bound.

Lovecraft's description of the risen continent is exquisitely detailed with sensory information. The smell of rotting fish and other sea... things... that are equally stranded upon the new rocky plain. The lack of anything to block out the sun. The desolate waste of the sea floor suddenly exposed to light. And our lone man tramping across it to find out if there's any way off.

Of course, in true Lovecraft style, all of this is told in flashback style to explain why the man feels as if his death is imminent. And this is the part of the story that doesn't work for me. While the part on the island is interesting in its landscape and the thing that happens, once he escapes, there is no reason given within the story that there should be anything to worry about after.

I understand that the tension in the story is the man's fear about dying because of what he saw, but doesn't ring true. Especially so considering what happens at the very end. How does it relate to the rest of the story?

It's an interesting story, and the part with the risen continent is well worth the read, but I wasn't impressed with the story overall. I think there could have been much more tension without it being done as a flashback.
Posted by Andrew Leon at 12:00 AM