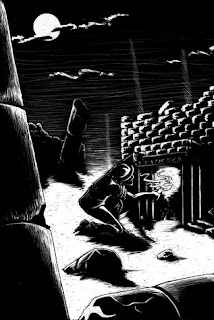 "The Nameless City" is a city so horrible and horrifying that it doesn't even have a name, hence the title. It's only spoken about in whispers and as threats to children and its facts have long been lost in antiquity. It's the murmurings that draw the unnamed protagonist to find it, but just its skeleton in the desert causes such fear in the man, he says that no other has even known fear like him.

But he does wait till morning.

Lovecraft's writing is very atmospheric, and the city he describes is truly creepy. Not just because it's abandoned but because it's... alien. All of the proportions are wrong, not to mention the strange winds and noises.

And anything else I say about it would be getting into spoiler territory. I'll say this, though: I was not satisfied with the ending. Everything else was great. Lovecraft's language and imagery make it a story well worth reading despite the ending, and, I think, other people may not have the issue with the ending that I had. Which I can't talk about without giving it away. If you like stuff like this:


"...afar I saw it protruding uncannily above the sands as parts of a corpse may protrude from an ill-made grave."

then you will like "The Nameless City."
Posted by Andrew Leon at 12:00 AM