There's Something About Mary (Doria Russell)

Earlier this year, Mary Doria Russell's latest book, Epitaph, was released. She was doing a book tour for it at the time and was scheduled to come through where I live...
But she got sick.
And cancelled her stop here.
And I really thought that was the end of it, because those kinds of things almost never get rescheduled especially when they're in smaller-ish cities and were free to begin with. But!
Being the cool person that she is, she rescheduled and showed up at our local book store earlier this month. 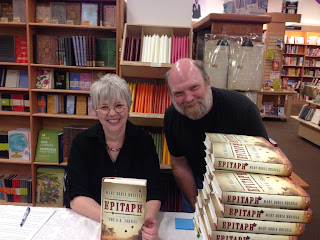 And that was pretty awesome because, now, I've met my top two favorite living traditionally published authors (the other being Neil Gaiman whom I met back in this post (and, yes, before I get any smart ass comments, I met him in that post; no, don't ask how that works; you wouldn't understand)).

Hmm... I'm not sure how I should refer to her. Mrs. Russell sounds too... I don't know. It's not that it sounds formal, exactly, but it sounds overly formal. But I can't just call her Mary. I mean, I'm pretty sure we're not on a first name basis. Well, anyway... She was a delight. Lively and exciting and an entertaining speaker. And you should all read her books.

Speaking of which, there were some interesting things about the event, things I don't really understand. First, my wife and I were almost the youngest people there (other than people who work at the book store), and that was really surprising to me. I mean, The Sparrow is science fiction (even if it's not shelved in the science fiction section of book stores (which, I guess, could be a problem)) so it, at least, ought to attract younger readers? I don't know. Maybe I just don't know how these things work.

Because, aside from the readers being on the older side, an awful lot of them seemed unfamiliar with Russell's work. Of the people that I spoke with, all of them were surprised that I've read all of Russell's books. To one woman I said, "There're only six," to which she seemed inordinately shocked. Like it was a huge deal that I had read six books. Of course, I speaking of that from a reading perspective, not a writing perspective. Six books is a lot to write, but I've read more than six books so far this summer, and the woman seemed to think six books should take, I don't know, years to read.

At any rate, it was an odd experience. When Gaiman was here, people I met and I talked about his various books and what we liked best, but I couldn't have that kind of conversation with the people at Russell's event because they were unfamiliar with the books. On the other hand, I got to tell them about what I like about her books and make recommendations about which ones to start with based on what they like.

Of course, The Sparrow is one of the three books on my list of books I think everyone should read.

I've reviewed most of her books, so here are my links to the reviews:
The Sparrow
A Thread of Grace
Dreamers of the Day
Doc
Epitaph

Yes, I do know that I've left Children of God out, but I read it back before I was doing the whole blog thing, and I haven't re-read it since... a long time. Still, it's mentioned in some of the other reviews.

Look, if you consider yourself a serious reader, Mary Doria Russell is someone you should be reading. She does characters better than, maybe, any other author I've ever read (and, again, I read a lot). To try to put this in perspective, Dreamers of the Day is not my favorite of her books, but her depiction of T. E. Lawrence (you know, Lawrence of Arabia) is so strong and has hung with me so much that I'm reading his Seven Pillars of Wisdom. And Doc feels like you're walking down the dusty streets of Dodge City right along with Holliday and Earp.