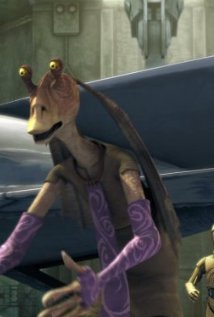 -- Heroes are made by the times.

This is probably the episode that no one was waiting for, considering the general view of Jar Jar, that is. Which is not to say that the episode doesn't have its moment, because it does. It's just that most of those moments are slapstick.

The actual conflict in the episode revolves around someone close to Padme betraying her in order to hand her over to Nute Gunray, who is still seeking revenge against her because of the fallout of The Phantom Menace. The real question, though, is why was Padme taking Jar Jar with her on a diplomatic mission. Maybe she thought this was a safe one to take him along on considering that she was going to see someone she was close to. And, yes, we know that Jar Jar becomes part of Padme's diplomatic contingent even by the time of Attack of the Clones, but it's unclear what his role was supposed to be during this particular mission.

What his role ends up being is "Jedi rescuer" as the battle droids mistake him for a Jedi after he throws on a cloak to hide himself during his attempt to rescue the captured Padme. Hi-jinks, of course, ensue.

My issue with the episode has nothing to do with the actual hi-jinks. For what it is, the episode is generally amusing. The issue is that it feels thrown in in order to give some screen time to characters who have mostly been left out of the narrative to this point: Padme, C-3PO, and, even, Jar Jar. So, while the episode does have an important plot point, overall, it feels a little strained and as if it's a bit of comic relief in the very serious story arcs that have so far dominated the series.

This is not an episode I would recommend to a first time viewer, but it's enjoyable enough within the context of watching the series.