-- Trust in your friends, and they'll have reason to trust in you.

The first thing to note about this episode is the music. It's quite a bit different than other episodes. Kind of space rock. Upbeat and exciting. I'm not sure why the music is different for this episode in particular, but I liked it.

Now, the episode, upon casual glance, looks kind of like a throwaway episode, but it actually contains quite a few important pieces of information.

Before we get to the important parts, though, here is one that is just fun:
We get the very first look in "Downfall of a Droid" of the IG series assassin droids in action. The IG series is introduced in The Empire Strikes Back with IG-88. 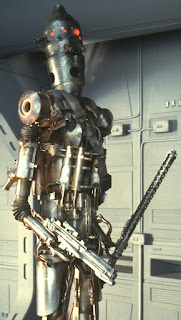 Ahsoka sees a couple of them deactivated and dismisses them as harmless despite Anakin telling her not to underestimate them. She finds out how right he is when they surprise attack them.

Oh, there's also this really cool thing with some tanks, but I can't tell you about that because SPOILER!

Okay, so, Artoo gets lost. Of course, we know that nothing permanently bad can happen to Artoo, because he has four more movies to go after the Clone Wars series is over. However, his loss reveals a couple of things about Anakin that are important to his character development:

1. Anakin wigs out. The Jedi are not supposed to form attachments but, here, we see Anakin really lose his shtuff over the loss of a droid. Obi-Wan even has to sort of reprimand him and remind him that Artoo is a mere droid and that Anakin should see it as nothing more than that. It's replaceable. Or it should be in the sense that Anakin should not have a relationship or feel ownership over it.


Note: This provides an interesting contrast to how we've been seeing the Jedi and their view of the clones. Though the Jedi should have no attachment to any individual clone, there is a lot of emphasis on their value as individuals. Droids have this same individuality. Or, at least, they have the potential to as sentient AIs. To keep the droids from developing true sentience, though, they have a protocol of regularly wiping the droids memories. [In light of what we know today about sentience, limited though it is, I find this idea of accumulated experience being part of sentience very intriguing, especially since this has been part of the story from Lucas since the 70s.]

2. Anakin has failed to follow protocol and keep Artoo's memory erased. Basically, Artoo has enough accumulated experience to operate as an individual. A sentient individual. Which explains a lot about R2-D2, not that we didn't already know it. But we get to see that played out here along with Obi-Wan's anger at Anakin for not doing it.

So, although on the surface this seems like a frilly adventure episode with no real substance, it actually contains significant character points for Anakin. And Ahsoka, too, in relation to her trying to provide a substitute droid for Anakin, but there's more to that than what it looks like, too, just not in this episode.
Posted by Andrew Leon at 12:00 AM