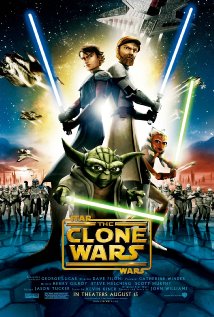 
I got to see The Clone Wars at a special Lucasfilm premiere event. It was a pretty big deal, and they had a special display area set up at the Presidio offices with original, concept art and maquettes, which are like concept sculptures. Unfortunately, we weren't allowed to take pictures, so I don't have any to show you. However, we got lunch in Star Wars lunch boxes created specially for the event. My friend didn't want his, so he gave it to me. I'd show you a picture of the lunch boxes, but they're in storage somewhere, and I'm not going to go dig around for them right now.

I'm not sure how widespread this information is, but one of the things we were let in on at the event is that the movie actually started out as individual episodes of the series. It was the first story arc. If you pay attention and are familiar enough with the series, you can actually see how the movie breaks down into its constituent episodes. On the one hand, I think launching the TV series with a movie was a great idea; however, I think they probably would have done better to have actually developed a movie rather than to string the several episodes together into a movie.

Which is not to say I didn't like it, because I enjoyed it very much, but the general response to the movie was a little underwhelming and I think part of the reason for that is that it didn't play like a movie. Because it wasn't.

The other failure of the movie was to involve the offspring of Jabba the Hutt. I think that's something people didn't want to look at. One, they don't want to see slug babies and, two, they don't want to view Jabba with any kind of sympathetic light. It's hard not to have sympathy for a parent who just wants his kid back. Personally, I found it an interesting take on Jabba, but I can see how it could cause people difficulty.

All of that said, the movie opens with a tremendous battle scene between the clones and the droids. It's, in a word, spectacular. The movement is very much like a video game, say Battlefront, and it's almost worth the whole movie just for that battle scene.

Also, this is where we're introduced to Ahsoka Tano, so the movie is essential from that standpoint. Anakin doesn't want a Padawan, but they send him one, anyway. A plot between Yoda and Obi-Wan, though they don't admit to it. He's set to get rid of her until he has to work with her during the battle, at which point he changes his mind. His comment to her is something like, "You wouldn't have made it as Obi-Wan's apprentice but, as mine, you just might work."

There are some other significant elements as well. 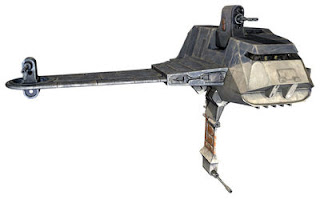 Basically, the movie serves to set up all the essential elements for the ongoing television series. It's not that you can't watch the series without having seen the movie, but the movie helps, especially for the dynamic between Ahsoka and Anakin. I think, also, if the approach to the movie is that of watching several episodes of the series back-to-back that it becomes much more satisfying. It's all in the frame of reference.