"The Colour Out of Space" (a book review post) 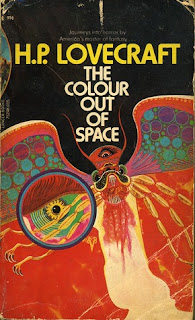 "The Colour Out of Space" is what I'm coming to recognize as classic Lovecraft. A regular guy comes across something strange and starts investigating it and discovers some -- look, I'm just going to put it in the vernacular -- "weird ass shit." Weird ass shit that freaks the protagonist out and affects him for the rest of his life, the length of which doesn't always extend beyond the length of the story. So it is with "The Colour Out of Space."

"The Colour Out of Space" opens with a land surveyor out doing what land surveyors do because a reservoir is being built. Before going, he's warned about "the blasted heath" and how evil it is, but he put it down to local superstition. At one time, there had been a road going through it, but so evil did they believe it that that road had fallen into disuse, and a new one had been built that circled far around the evil place. Even with that, the surveyor thought nothing of the place... until he came upon it, at which point a great reluctance came upon him to enter it. But he had no choice and, so, traveled through the place on his business.

So fearsome was the place, and because he had not, yet, finished his surveying work, he asked the locals about it, but all he could get was half stories about strange days. Until he finally finds the person who can tell him the horrible story.

Because the story is being told about something that happened decades before, we never need to worry about the protagonist; however, that doesn't make the story any less horrifying. All we really know is that the locals are greatly looking forward to the reservoir and that "the blasted heath" will finally be consumed by the deep waters. We also know that after hearing the story, our protagonist vows that he will never drink of the waters that will come from that place.

Beyond that, you'll have to read for yourself.
Posted by Andrew Leon at 12:00 AM