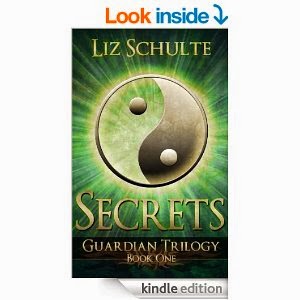 Secrets is a great example of how even a poorly written novel can be popular. And, when I say "poorly written," I mean it on just about every level that you can mean it. Still, though, it's better than Snow Crash but, then, Snow Crash is a level of stupidity all its own.

The first and most obvious issue the book has is that it needed an editor. This may be the most poorly edited book I've ever read. There were misspellings, homophones, tense issues, missing words, wrong words (above and beyond the homophones, which are, technically, wrong words), missing letters, wrong letters... um, did I cover everything? I'm not actually sure. And it's not that there were these things; it's that there were these things on every page. And not that there was, like, one per page, it was a handful per page. And I haven't even mentioned the punctuation... oh, wait, there, I did. Let me just say, and not just to whomever edited the book (I'm assuming the author (but I don't know that)), but to everyone (because this is becoming a real peeve of mine): a dash is not a "catchall" piece of punctuation. You can't just stick in a dash (either kind) because you feel like it. Dashes have a purpose, and they are much more limited than most people think. [Let me just put it like this: Quit using dashes! Seriously.] There were more punctuation issues than just the dashes, but it was like someone just sneezed dashes all in the book.

At any rate, if editing is an issue for you, don't attempt this book, because you will want to pull out a red pen and mark all over your Kindle screen (or whatever screen).

The next issue is that it's first person but not just first person: It's written from two different first person perspectives in alternating chapters. Which, in and of itself isn't an issue [I mean, I've done that, so who am I to complain, right?] except that both perspectives are written in exactly the same voice. There is nothing to differentiate them and, especially considering one is male and one is female, there ought to be some differentiation. The author doesn't even bother to give us alternate perspectives on the same event once we get past the first few chapters. For the most part, they just pick up where the other left off or show us what is happening where the other character isn't. Not to mention the fact that [spoiler alert] during the climax, when Olivia starts to doubt Holden, there is no suspense because we've been in Holden's head the whole book (and so has she, actually, for part of it) and we know how he feels about her.

The story itself is pretty typical; in fact, I felt like I was watching a cheap knockoff of Buffy the Vampire Slayer through most of the book. So let's see:
1. Female protagonist born with a hidden destiny that she doesn't know about.
2. Bad boy romantic interest whom only she can save and turn to the light.
3. Good boy romantic interest to create some tension.
4. Traumatic death of a loved one.
5. Enigmatic mentor who never tells her anything useful other than that she's "special."
Yeah, it's got it all. Actually, it's worse than what I'm saying, too, because the female protagonist, who hasn't been in a relationship for over a year, finds herself instantly infatuated with two men at the exact same time. What are the odds? [Is the sarcasm coming through?] She immediately begins acting in ways that are just not her. Of course, we don't know that other than that she tells us that "she never does this kind of thing."

There are two things here:
We have to take Olivia's word about things way too often. The author never shows us how Olivia supposedly really is. For instance, when Quintus tells her that she's been born this guardian (the first one in 2000 years, so she's mega-special), he says to her something along the lines of "Haven't you always been a loner? Someone on the outside looking in?" But we never see that about Olivia. In the book, she has an awesome best friend who has been with her since middle school (that doesn't sound like a loner) and she's quite adept at being a socialite, so none of that stuff rings true in the book (it reminded me of Percy Jackson and how, at least in The Lightning Thief, he is constantly telling the audience he's one thing (a rebel and troublemaker) while acting completely the opposite).

It's quite difficult to take Quintus as a love interest seriously since Holden is the one offering the alternate perspective to Olivia's. To put it another way: Quintus is never a credible threat.

And speaking of vampires, Holden is "Vampire Lite." It's like the author really wanted to do a vampire story, but she also wanted her vampires to be able to go out in the daylight, so she just calls them "jinn," instead. Or "jinni." She seems to use the terms interchangeably, and they have nothing to do with the actual jinn mythology. It's just a word she uses, which, actually, bothers me. If you're not basing it on the actual thing, make up a word, or, you know, make your vampires all sparkly. Oh, and jinn have demons in them that operate much the way Whedon's vampires do without the actual changing into vampires.

Perhaps the thing that bothered me most, though, is the sudden, inexplicable, telepathic bond Olivia and Holden develop. It's all very much "we love each other so much, we know each other's thoughts! We're just made for each other! Two halves of the same soul!" [Yeah, I want to go wash my mouth out from just typing that.] So, yeah, their connection is so deep that they spontaneously develop the ability to read each other's minds. And, yet, at the end, even though Olivia has been inside Holden's mind, she doubts whether he really loves her and thinks that maybe he's just been using her the whole time.

Mostly, I just found the book tedious. There's nothing in it that hasn't been done elsewhere and done much better. If it had been well edited (or just edited), I might even would say: If this is the kind of thing you like (cliche love-at-first-sight stories), give it a read; as it is, I can't say that. Evidently, though, based on the other reviews and ratings, most people don't care about that kind of thing, so, I guess, if you like cliche love-at-first-sight paranormal(ish) love stories and don't mind bad grammar and poor punctuation, give it a read. I won't be going on to the next book, though...

Which reminds me! Considering the cliffhanger ending (which I won't spoil), it shows how much this book didn't hold my attention, because I don't care what happens enough to endure another of these books. The two stars I'm giving it is me being generous. I'd say it's probably a 1.5 star book.
Posted by Andrew Leon at 12:00 AM