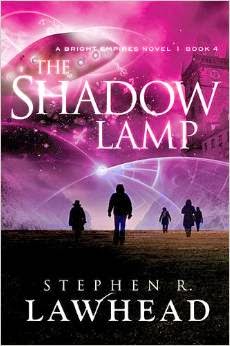 Here we are at book four of the Bright Empires series by Stephen Lawhead. You can see my reviews for the other books at the following links:
The Skin Map
The Bone House
The Spirit Well

[Seeing that this is book four, I'm not even going to try to do this without spoilers. I'm not sure there's a good way to even try. I will, though, be as general as possible, so any spoilers may not make sense anyway. Except for one, which will be a huge spoiler, so, if you even think you might want to read this series, when I get to the part where I'm talking about the new conflict, well, you'll probably not want to read that part.]

The elapsed time span in this novel seems to be much shorter than the previous books, at least as it passes with the central characters. There is still all kinds of back story as it relates to the Flinders-Petrie family and Burleigh, which is all interesting, but I'm not certain exactly how much of it pertains to the "present day" story. Well, I think that the stuff to do with the map is at least quasi-important, because the map (the skin map) is very important, so how it ended up in pieces is probably going to end up being important. But, still, the advancement of the main plot, the story around Kit, doesn't make much progress.

However, that doesn't mean there are no significant events.
We're introduced to another new character, and I'm not sure how vital he will end up being to the overall story, but he was at least vital in one area in this book. Still, it's kind of weird to me that Lawhead has continued to introduce major characters this far into the series. I'm not saying that it's a bad thing; it's just not usual. Generally speaking, series like this give us the whole cast of characters right up front and, if not, certainly by the end of the second book, but Lawhead gave us two major characters in book three and at least one in book four (and possibly a second, I'm not sure, yet), so that aspect is interesting to me.

The other thing of interest to me is the conflict (and, yes, this is where the major spoiler comes in). During the first three books, the conflict is really just over the skin map itself. Kit and his group (the Zetetic Society, even though Kit didn't know that) on one side and Burleigh on the other. The skin map is a twofold prize: 1. The obvious one, it provides a map to travelling the leys, and there is a lot of profit in ley travelling if that's your motivation. 2. There is a secret hidden the map. There is speculation that the secret is the Spirit Well, but no one is quite sure if that's it or not. Of course, the Spirit Well, all by itself, is a prize beyond compare.

So for three books we're going with that as the conflict, but The Shadow Lamp introduces a new character, Tony Clarke, and, through him, we discover that there is something much worse going on, something that could lead to the actual destruction of not just the universe but the entire multiverse. Of course, getting the skin map may be the only way to stop the threat. All of it leaves one wondering how in the world he will wrap all of this up in the fifth (and final) book, which is something I started wondering in book three, actually.

Now, here's my problem:
Bright Empires is not really a time travel story even though it has time travel, of a sorts, in it. However, this book develops a time travel issue, and I'm not sure, yet, how I feel about it. [This continues the spoiler warning, because I'm going to get kind of detailed with this conflict.] There's a lot of theoretical talk in the book about multiple dimensions and how time works and all of that kind of stuff, and I'm okay with that. On the whole, it all deals with current ideas, so it's not wild speculation by the author [Which I would probably be okay with, too, but I do want to point out Lawhead has not just made up all of the theory stuff in this series. There's science that goes with it.]. However, there is one theoretical position that I have not read about [So it could be made up? I haven't tried looking it up, yet, to see if it's something that's being said out there in SCIENCE.], and the logic with which Lawhead uses it kind of baffles me.

The idea is that time flows... well, it flows backwards. Instead of flowing from the past to the future, as we experience it, the idea in the book is that time flows from the future to the past. Okay, interesting thought, but what does it have to do with anything? Well, because of this reverse time flow, if something happens to mess up the future, that error gets carried back into the past and wipes everything out. In the book, this will result in the collapse of the multiverse and it will be as if it never existed. Time itself will cease to exist.

And here's my problem with that:
If such a thing happened and time actually ceased to exist, then nothing would ever have happened to begin with. There would be no story, because it never would have existed. Which may not make sense, and would also negate the, well, telling of the story, but, what I guess I'm saying, is why make it so that nothing, not even time, would exist, because then there was nothing to begin with. And I may be getting to metaphysical for this discussion, so I'll just say that that one logic hole bothers me. Probably not enough to run the series for me but enough to put me back to reserving judgment till the next book.

That said, I like Lawhead. He's one of the few authors whose books I will just pick up and read whenever he has a new book out. He gets to go to the front of the line, so to speak, which is not so figurative as it may sound. Also, I've really enjoyed this series, especially after what I felt was a lackluster start to it (see the review of the first book). Even though I'm having ambivalence about his whole "utter annihilation of the entire multiverse" thing, I'm sure I'll enjoy the last book. At least, I hope so. I suppose I'll let you know whenever the paperback is released.

In related news that is not related:
I was looking at the pre-sale information for the fifth book, The Fatal Tree, and it's ridiculous. The hardcover is $20, which pretty normal, but the Kindle edition is $18! What the heck? And the paperback? The paperback is only $12. Now, anyone, tell me why I would pay $6 MORE for the e-version of the book. And this is why I have no sympathy for Hachette and other publishers who want to gouge consumers by charging more for something which has virtually no cost for them. It's just wrong.
Posted by Andrew Leon at 12:00 AM