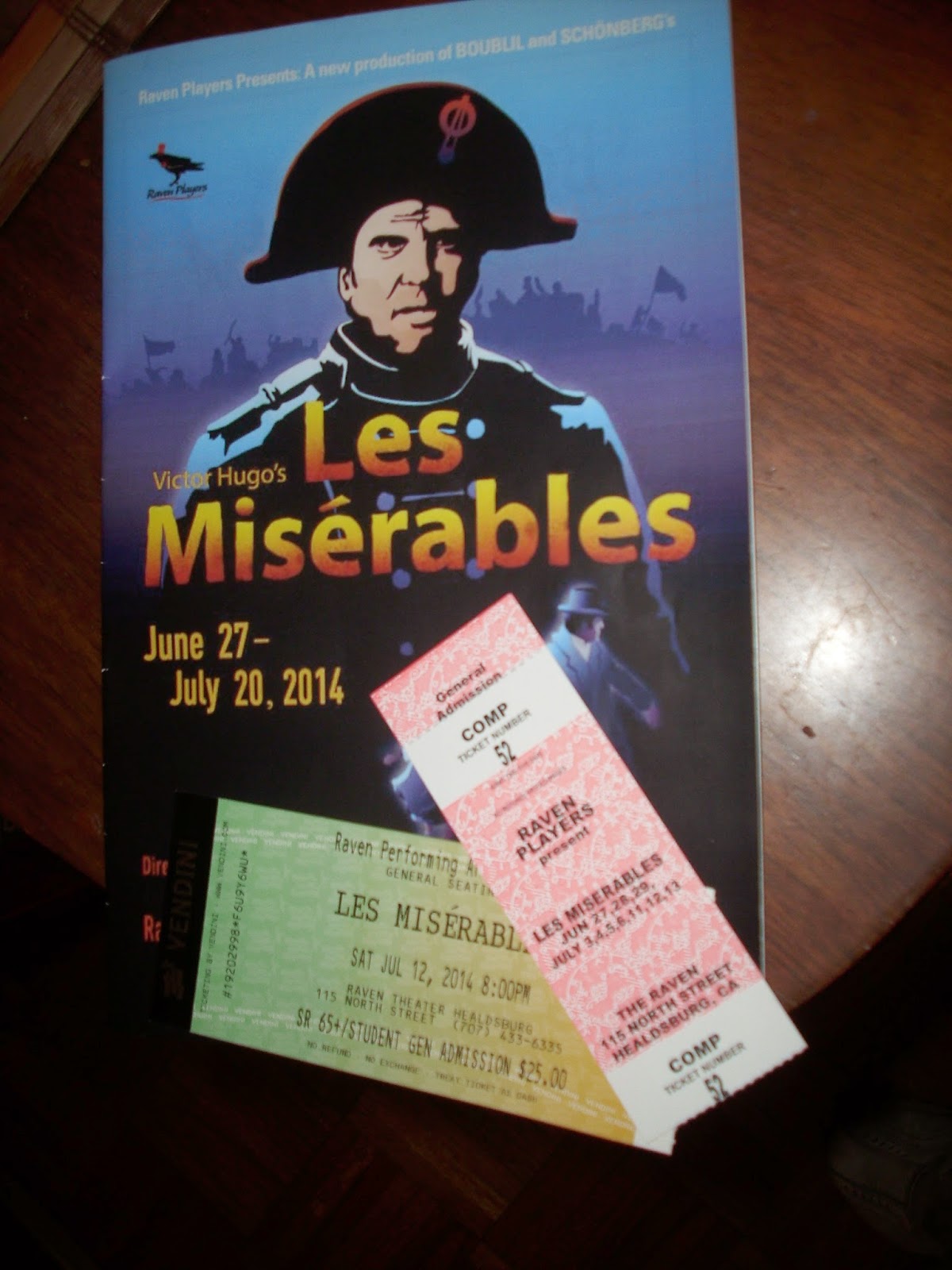 As I mentioned in passing, recently, my oldest son has been a part of a local production of Les Miserables. He's actually getting paid for this gig, which is pretty cool, especially since he didn't even audition for the part. He was requested by the director (whom he worked with several years ago in a production of The Pirates of Penzance). Not that he had a big part in that he was one of the main characters or anything; he wasn't, but he did have several solo bits and was a named character, Combeferre, along with the ensemble stuff he did. Basically, he was on stage through the greater part of the performance. He's even the first one onto the stage, as he gets pushed out as part of the prisoner gang.

As you can guess, I'm going to say my son was great. And he was. But, look, it's chorus work, mostly, and the chorus folk did a fine job, on the whole (with the exception of one kid who didn't know what to do with himself when he wasn't actively doing anything). His singing was right on, so it's hard not to be great when you don't have so much room to screw up. Okay, look, if my kid has one issue, it's that he might smile too much, but that's also one of the things that makes him good. He's got charisma, and he draws eyes to him just by being on the stage. [Recently, he was in Pride & Prejudice in the role of Bingley, largely due to his ability to smile. Well, he got that role as opposed to some other role, because no one can smile the way he can.]

Overall, the production was quite well done, but there were a few issues. Primarily, it was difficult at times to hear the singing over the orchestra. Maybe, this was an issue for use because we were sitting right up front, just one row removed from said orchestra, so the music was right in our faces. Or, maybe, they just didn't have the sound system set up to overcome the orchestra; I don't know. What I do know is that I was glad, as I watched, that I have seen the movie, because there were a few places I wouldn't have know what was going on if I hadn't seen it, because I couldn't hear the vocals. The worst of that happened during the scene where Javert shows up with the revolutionaries, where I still had a moment of "huh? What's he doing there?" until I remembered what was going on.

Speaking of Javert, I'm still waiting to see a version of Les Mis where I think the Javert performance is worthwhile. If the other performances in the recent movie adaptation hadn't been so strong, Russel Crowe could have ruined it, because he was pretty horrible. The guy in this production was better but only just. Mostly, he just stood in place on stage and sang, which is where he did a better job than Crowe, because he did have a good voice and sang the numbers well, but he just stood there and sang for most of them. Unemotionally. In fact, just about his only acting was to tilt his head back and look down his nose at Jean Valjean. My wife says that Javert is the kind of role where you can get away with playing it with a stick up your butt, because Javert has a stick up his butt, and I agree, but I am still dissatisfied.

The actor playing Jean Valjean, Pedro Rodelas, had a very Hugh Jackman look to him and played the role with the same kind of heart, which made him hard not to like, even if some of the music stretched his vocal range beyond his ability. I think the same can be said of Jackman, though (actually, I think I did say that somewhere after I saw the movie), but the emotion both actors poured into the role made up for any gaps in their singing ability.

The most difficult part of this production was the actor they chose to play Marius, David Strock. The man can sing, but he was just too old for the part, and I couldn't buy into him as the student revolutionary standing next to the young woman playing Cosette. He just looked out of place, which made it difficult to buy into that whole young love-at-first-sight thing that's supposed to be going on.

However, the kid they had playing Gavroche, Ari Vozaitis, was amazing and could have completely stolen the show if he'd more "screen" time. I'm guessing he's not older than 12.

The only other issue is a practical one: The show is quite pricey. But I suppose that's the price you pay ["Claim the pun!" as Briane Pagel would say.] for local theater. Still, $30 is a lot to pay for a ticket but, if you can afford it, I would strongly recommend the show. I'll put it like this: It's long. Three hours long. But I didn't once have that feeling of wondering how much longer it was, and that's saying a lot. Also, my wife cried and, as previously stated, if my wife cries, you know it's good.
Posted by Andrew Leon at 12:00 AM