The Plot Line of Your Life (an IWSG post)

We talk a lot about plot and plot arc in the creative writing class I teach. If there's just one thing I want them to come away with it's what a plot is. Not just that the plot is the story but what a plot actually is and how it works and develops within a story. We look at this a lot: 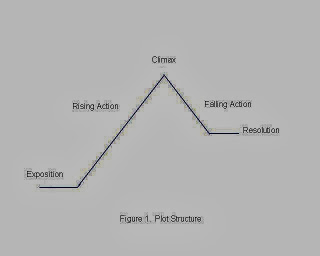 Well, not this, because this is not actually how I draw it. I draw it more like a simple roller coaster -- gradually up and, then, steeply down, returning to the same level upon which it started (because that makes more sense in my mind, I guess) -- in its basic form and, then, add in extra hills to show plot complications, and, well, this is where a drawing would come in handy, but I don't know how to draw that stuff and post it here for you to see. [Well, without actually drawing it and... oh never mind. I'm not doing that right now, but, maybe, at some point, I will.]

The thing to note here is that the characters, of course, can't "see" the climax. For one thing, they're only characters, but, if they weren't, they're within the story, and they can't see what's going on beyond what's actually happening in the moment. Authors, then, have to make sure that the characters are as true to the moment as possible. That means when bad things are happening, the characters have to behave as if those bad moments are all the moments, because they can't see the happy ending that's coming. Assuming that there is a happy ending coming, but most stories do have happy endings, so we're just going to assume that that's what's happening.

As the author, though, we have to push the characters along and keep them from actually getting stuck. Even when it looks like there is no hope left, that they have descended to the very depths and there is no way out, we have to find the motivation for them that will send them on their way, keep the story going, take them to their climax. Remember, we know what's coming.

And here's where things get a little backwards from how I usually do them. Usually, I will give some life example and turn it into a writing analogy, but I'm going the other direction this time. This is a writing example leading to a life analogy.

So here's the thing:
In our lives, we are like the characters in a book: we can't see our own climax. We don't know what's coming. Sometimes, people decide they hit their climax during high school and everything after that is just denouement. They don't try to achieve anything else, because they make the assumption that there's nothing that will ever be better in their future. Or, maybe, it's a wedding. Or, like Orson Welles, your very first completed project.

After Welles finished Citizen Kane, he said he would never make another movie as good, and he didn't. He was only 26. I have to wonder, now, if it was because he had decided that Kane was his climax. Maybe not, but our attitudes play such a huge role in what we do and how do it that it's really hard to know. Maybe, if he'd believed Kane was just the beginning of the great things he would accomplish, he would have made even greater movies. But this isn't really about Welles.

Sometimes, we end up in  those same kinds of depths that authors drop their characters into. Like it is with those characters, we can't see what's coming. We don't know what lies ahead. All we can see is the moment. It's important to realize that our climax is still on the way. Even if it's not, it's important to act as if it is, because acting as if we're still in our rising action can propel us higher. It can make a Citizen Kane moment merely a part of the rising action rather than sending us on a slow descent of falling action for the rest of our lives.

We don't know where our own climaxes are in the stories of our lives. We can't see it from the outside, and, until we die, that story isn't over yet. There is always the chance to achieve something greater, go farther, rise higher. It's only when we decide that we've got nothing left on the horizon that that becomes true. So, no matter how bad things get or how bad they seem, remember that there's still more to come. More rising action. More complications. But, somewhere ahead, a climax. A great moment, the great moment, of your life. Don't give up before you get there.

This post has been brought to you in part by the IWSG.
Posted by Andrew Leon at 9:54 PM