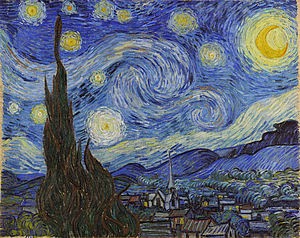 Or, maybe, even this? 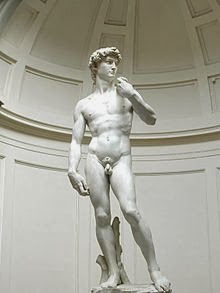 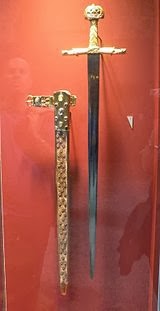 Joyeuse, the sword of Charlemagne
While it's true that we think of great works of art or craftsmanship as masterpieces, it wasn't always so. Far from it, actually. For hundreds of years, right up until modern times, the word masterpiece was actually applied to what was probably going to be the least accomplished work of one's professional career.
Wait. What?

There used to be this thing in Europe called a guild system. I'm not sure if they called it that, but it's what we call it. If you were a craftsman or artisan of any kind, you belonged to a guild. So there were guilds for woodworkers, stone cutters, goldsmiths, cooks, painters, sculptors... nearly anything you could think of. And, while it may seem that these just covered, basically, practical professions, they also covered the arts (and many of the most famous pieces of art in history came out of guild work, especially stuff done in cathedrals and other important buildings). [I also want to point out that the guilds also, to some extent, covered writing, especially scholarly writing.] If you wanted to be in one of these careers, you would get apprenticed to someone within the guild to learn the trade. Usually, this was just arranged between the families involved (because often the apprentice went off to live with the person he was apprenticed to), but, (I think) sometimes, these arrangements could be assigned by the guild.

So the apprentice would spend years working with his master to learn his trade, whatever that trade was. At the point that the apprentice had (1) learned everything from his master that he could or (2) learned everything that his master was willing to teach him, he would either become a journeyman (someone who "traveled" (because actual travelling wasn't always involved)) while he worked on his craft and attempted to learn new skills through practice or from finding others to learn from or, if his master had taught him enough, attempt to become a "master craftsman" himself. This was kind of like a test. Okay, no, it was a test. A skills test. The craftsman would have to produce an item to show that he had mastered his craft. If the item was judged worthy, it was called his "masterpiece."

And, as an aside, many (most? all?) of the guilds kept the items that "students" presented and had halls to display great "masterpiece" items. As an additional aside, some of these guilds grew into actual universities. Two prime examples are the Universities of Paris and Oxford.

So... it is true that an artisan tried to do his absolute best work on his masterpiece; it is also true that the production of a masterpiece marked the beginning of a master craftsman's career, not the culmination of it. It was expected that a "master" would go on to create even better works of... art. Because a master was expected to create things of beauty. Even if it was just chairs. Or stone pillars. Or swords. Or, even, writing, to a certain extent.

So here I am to present to you The House on the Corner as my "masterpiece." Not my best work, but the work that proves that I can do the work. I intend that everything will just get better from here on out, and I think that I've already done better. "Christmas on the Corner," for instance, is better. Brother's Keeper will be even better. That's how it goes. Or how it should go.

Now, you get out there and make your "masterpiece"! Whatever that is. Create that masterpiece and declare, "It only gets better from here!"

This post has been brought to you in part by Indie Life.
Posted by Andrew Leon at 9:16 PM