So, yeah, I know. After Oblivion, why would I want to and watch After Earth? 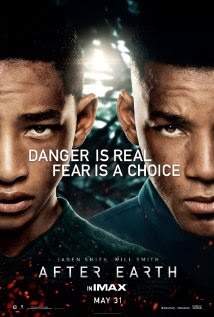 Either it was some weird form of masochism or it was Will Smith.
Actually, it was Will Smith and all the bad stuff said about his son because of the movie. I needed to see, okay! Sometimes, you just have to know, like when someone says, "This tastes awful! You try it," and you do. You're thinking, "Surely, it can't be that bad," but, then, it is, and you get mad at the person offering you the taste even though he told you it was going to be bad.

And, wow, After Earth was bad. So bad.

And, you know what, I'm not even going to talk about the stupid science in this movie.

In one of the most ridiculous scenes I've ever witnessed in a movie, Cypher (Will Smith) gets up from his seat and places his hand against the interior hull of the spaceship he's in. He goes to the cockpit and tells the pilots that he feels gravitons and wants to know what's going on. This is like saying, "Hey, I feel some neutrinos; what's up with that?" Anyway, there's a field of asteroids nearby, and, sure enough, when they check, they find there's a sudden buildup of gravitons happening, and Cypher tells them to be careful because the asteroids might suddenly explode. Predictably, the graviton levels start to drop... just before the asteroid field spontaneously explodes. Because that's what asteroids do when they're sitting around in space; they spontaneously explode. The ship is forced to crash land on Earth, abandoned by mankind 1000 years prior.

Cypher and his son, Kitai, are, again predictably, the only survivors of the crash, but Cypher is badly wounded, which sets up the contrived scenario where Kitai has to go trekking across the planet to get to the other part of the ship to fetch a homing beacon. He has to trek across the planet on which "every living thing has evolved to kill humans." Oh, and climb an active volcano. No, wait, I don't just mean active; I mean actively active. As in, it's in the process of erupting. Because that's such a great idea. And I won't even go into the part where he has to fight the alien that they brought along with them, another thing that has evolved or been engineered "just to kill humans."

And I'm not even going to go into the physics involved in a bird no bigger than Kitai flying off with him. I'm just gonna say "bullshit!" again. I'm also not going to go into how the entire planet freezes over every night and, yet, remains lush and green. I don't even have a word for that, because bullshit doesn't cover it.

Now, I haven't seen The Happening, but I do know what it's about, and After Earth struck me as nothing more than a bad sequel to a bad movie. Another low for M. Night. The bad thing here is that Will Smith brought Shyamalan into the project, not the other way around.

So, yeah, the original story idea was Smith's, but it involved a car crash in the woods in which the father is injured and the son has to go for help, and he should have just stuck with that story. But he decided he wanted to go sci-fi with it, so he hired a guy who wrote a script then went to Shyamalan with the script who also worked on the writing of the script and what Smith ended up with was a disaster that should have crashed in the woods and been left there.

I mean, not only is there no science in the science in the sci-fi movie, but they stripped out of Cypher Raige (yeah, really? he needs a name like "Raige"?) everything that makes Will Smith an enjoyable actor. Cypher is nothing more than the stereotypical emotionless military character out of touch with his son. Of course, Smith didn't want the movie to be about him; he wanted it to be about his son. This was to be the movie to give Jaden a foothold into his own career of action stardom.

And that's the second reason I wanted to see After Earth. I liked Jaden in the remake of Karate Kid, but he got slammed pretty hard for his performance in Earth, and I wanted to know if it was justified. After watching it, I'm not sure. Based on his performance in Karate Kid, I'd like to say his performance in Earth is due to bad directing (because his father certainly delivered one of the worst (possibly the worst) performances of his career), but it's hard to know with only one other movie to compare against. He certainly didn't help the movie any, though, and his scene where he stands on the cliff and yells at his father through his communicator was almost painfully awful. But I really want to give him the benefit of the doubt and blame it on Shyamalan, who hasn't made anything watchable in over a decade. I guess we'll just have to see what happens. Assuming Jaden Smith gets another chance. A movie that crashes and burns as hard as this one did can kill a career.
Posted by Andrew Leon at 9:33 PM