Are You Being Hustled?

Some of these things actually happened.

But probably not many of them. At least not in any way close to the presentation in American Hustle. 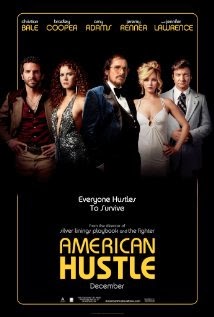 That doesn't stop it from being an excellent movie, though.

It's one of the few movies I've seen where I had no idea about what was coming next. At its base, it's a con movie, so you're never quite sure who's conning whom and what anyone has up his sleeve. Or under her skirt, I suppose, since the women are perpetually dressed as they are in the poster. And, then, at least a couple of the characters are at least slightly unhinged, and you never quite know which direction the story is going.

Surprisingly, the movie opens with one of those flash-forward/flashback type things that I normally hate, but they really made it work in this one. For one thing, the movie doesn't start near the climax, just at the point of the first sting operation. It's the place where we meet all of the major players, so to speak. Once the deal falls apart, we flashback with Irving Rosenfeld for a first person narration (which I also usually hate) of what brought him to that point. But what makes it interesting is that when we get to the part where he crosses paths with Sydney Prosser, she picks up the narration and, then, they have this kind of dueling narration giving us the back story, and it really works. It helps that it's not a "36 hours earlier" kind of scenario. It's the characters telling us about who they are, you know, as people, and that's what makes it work.

As interesting as the story is, though, it's the acting that makes this movie. The performances, all of them, are incredible.

Christian Bale shows us once again just what he's willing to do physically to become his character, this time putting on a bit of a paunch (which he shows off in the movie in a very unflattering way) and shaving a bald spot onto his head (also unflattering). He's what can only be described as a sleazy character, a con man, but, by the time we get back to the point in the story where it started, we have total sympathy for him. I just want to point out that I am not a Bale fan. I have respect for what he's willing to go through for a role (like in The Machinist and Rescue Dawn), and I think he's a good actor, but I don't really like him that much. That I say he was impressive in this role is, then, saying something.

Bradley Cooper is amazing as a somewhat overzealous FBI agent. And I'd say more about him, but I don't think I can without spoilers. I'll just say that I think Cooper has a certain intensity about him that not many actors can equal. And, according to my wife, he and Adams deliver one of the sexiest scenes she's ever seen. The amazing thing about that is that nothing happens in that scene. Well, not nothing but, you know, nothing happens: there is no loss of clothing or anything like that. But it's intense, and most of that is from him.

Jennifer Lawrence continues to show that she's more than just a pretty face. I'm not quite sure she deserved her Oscar last year (not that her performance wasn't good; it was. I've just never been convinced it was "best actress" quality), but, if she gets a best supporting Oscar for this role, it will be deserved. The scene with her and the "science oven" is almost enough all by itself to earn her the Oscar.

And, then, there's Jeremy Renner. And his hair. Because if Amy Adams boobs almost deserved a screen credit, Renner's hair certainly did. I could not take my eyes off of it. It was amazing. And, in a movie where everyone's hair was pretty amazing, that's saying something. This is the first movie I've seen him in where he shows me he can do something besides play "taciturn hero" (and, no, I haven't yet seen The Hurt Locker, but, knowing what it's about (loosely), I'm guess he plays "taciturn hero" in that one, too). He's pretty great as a New Jersey mayor in this. He's pretty great in the sense that I did not actually know he was in the movie before I was seeing the movie, and, then, I kept wondering if I was wrong and maybe that wasn't really him, so that, I think, is a pretty good performance.

Louis C.K. also fit in nicely. I don't think there was any kind of stretch for him as an actor, but he worked well with everyone else. As did Elisabeth Rohm (from Angel); I didn't recognize her at all.

The end result is a lot of compelling performances and an interesting plot. Enough so that, as I sit here writing this up, it makes me want to watch it again. Especially Jeremy Renner's hair. I don't think I've been so captivated by anyone's hair since the Dallas Cowboys won the Super Bowl back in '93 (I think) and someone (Emmitt Smith?) poured a cooler of water over Jimmy Johnson's head, and his hair didn't move. It was like he had on a plastic, hair-shaped helmet. It was fascinating.

Oh! And the cameo appearance by De Niro... the perfect touch.
Posted by Andrew Leon at 10:07 PM