I heard this interview with Matthew McConaughey on NPR a while back about how his family lost a lawsuit because he won the most attractive award (or some such) his senior year of high school. [It's an amusing story about his early high school issues with acne.] You would never be able to tell that from the way he looks in Dallas Buyers Club. 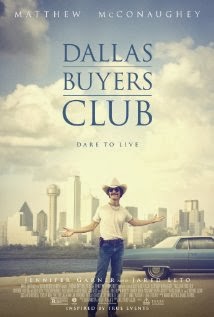 Seriously, McConaughey looks awful, and that's saying a lot considering who he is. He looks like he's wasting away, which is appropriate to the character of Ron Woodroof, who is dying of AIDS.

In the 80s, when I grew up, we were going to die of one of two things:
1. "Russia" (in quotes because it wasn't really Russia; it was the USSR) was going to destroy the world in nuclear fire (or a computer mistake was. It was probably 50/50 which direction that would go).
2. We were all going to die of "the AIDS."

Dallas Buyers Club completely captures the horror of discovering having HIV in the 80s and the prejudice that went with it. [Like when I was in middle school and all of my friends told me (completely seriously) that I was going to die because I sat in the same chair as someone with AIDS that had visited our classroom.] McConaughey is absolutely brilliant. The wail he releases in his car once he has actually confronted what's going on is... I have no other word than chilling.

Seriously, I have never thought much of McConaughey other than that he's mostly a pretty boy that can memorize lines. He's never stood out to me as more than someone with a charming smile, but, in this, he is amazing. His willingness to destroy his body for the part rivals anything Christian Bale has ever done, and he brings a stellar performance along with it. If he doesn't get best actor for this role, it will be a huge injustice.

Jared Leto's performance is also incredible as the fictional conglomeration character Rayon. The relationship between Woodroof and Rayon is demonstrative of Woodroof's changing views as he formed relationships in the community suffering from the same fate as he.

AIDS and the fear of AIDS doesn't carry with it the same weight as it used to, and I don't think people growing up in the 90s and later have the same understanding of HIV as people who went through the 80s when it suddenly became an epidemic. Safe sex has become normative, at least, the idea of it has. Prior to the 80s and HIV, the idea of using "protection" during sex was mostly to prevent unwanted pregnancies. At least, that's my perception of it.

At any rate, Dallas Buyers Club is a powerful movie, the most powerful movie I've seen in a long time, and I highly recommend it. It might be the best movie of the year, but I don't think it will get the Oscar for it.
Posted by Andrew Leon at 10:21 PM